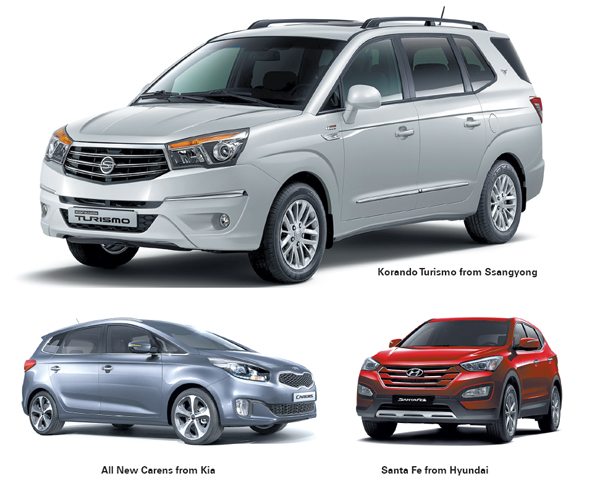 Clockwise from top;Korando Turismo from Ssangyong, Santa Fe from Hyundai and All New Carens from Kia

Though sales are lagging in the local auto market, SUVs and RVs seem to be a bright spot given the increasing popularity of camping and leisure activities here.

Hyundai Motor, the nation’s largest automaker, said domestic RV sales in the January-April period reached 40,570 units, a 92.3 percent increase from a year earlier. Although sales of the Veracruz, a high-end SUV, fell by nearly half, the new Santa Fe was much more successful. Its sales jumped 320 percent on-year to 26,926 units. To keep the momentum, the company is looking to the Maxcruz, a seven-seat SUV introduced in March, and the new Tucson ix, scheduled to go on sale later this month with a two-liter gasoline engine. 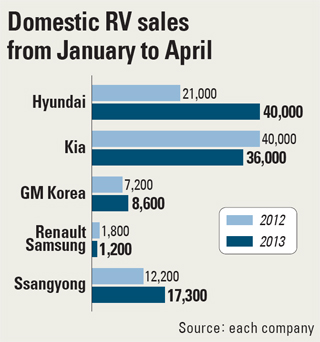 GM Korea, the nation’s third-largest automaker, also saw its cumulative RV sales climbing by 18.7 percent to 8,628 units at the end of last month. The local unit of U.S. auto giant General Motors is hoping that the Trax, a small SUV released in February, will drive sales in the future.

Ssangyong Motor, which specializes in SUVs, might be the biggest winner as its April sales were the highest since December 2006.

In particular, Ssangyong’s domestic sales grew for four consecutive months thanks to increased sales of RVs, which now include the Korando Turismo minivan. In the first four months of 2013, Ssangyong sold 17,369 RVs, a 41.26 percent increase from the same period last year.

Kia, the nation’s second-largest automaker, sold 36,822 RVs in this January-April period, a 9.9 percent year-on-year decrease. However, the company said that its new Carens will drive sales back into the black. The multipurpose vehicle launched this March will also be offered in a seven-seat diesel model from this month.

Renault Samsung saw cumulative sales of the QM5, the company’s only SUV model, drop 34.1 percent on-year to 1,202 units. However, the Korean unit of the French automaker Renault expects that the situation will change when its QM3, a small crossover utility vehicle, goes on sale in the second half of the year. The QM3, also known as the Renault Captur, was picked as the best car at the 2013 Seoul Motor Show.

Until the QM3 introduction, the nation’s fourth-largest automaker will promote the 2014 version of the QM5, which includes a model equipped with a 2.0-liter gasoline engine and enhanced power train.

Industry insiders predict that sales of RVs will continue to increase as vacation season approaches. The camping industry estimates that the number of campers in the country should grow to 1.5 million this year, with the industry reaching 40 billion won ($36.5 million) in value.

The popularity of some RV models is also evident in the used car market.

According to SK Encar, the nation’s largest used car dealer, some SUV models depreciate more slowly than city cars. For instance, the 2010 Kia Sportage R diesel model depreciated at a rate of 16.39 percent, which was lower than the 2010 Kia Morning’s 22.47 percent. Automakers are also offering incentives to further drive RV sales this month.