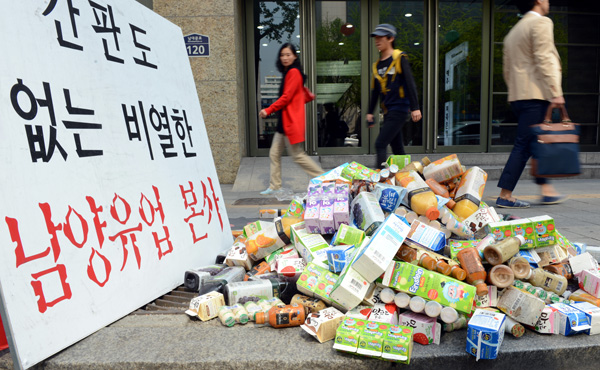 Prosecutors said yesterday they raided Namyang Dairy Product Company on suspicions that it bullies stores to buy more products than they can sell and unloads products near their expiration dates.

In April, some retail store owners accused 10 officials of the company including Chairman Hong Won-sik and CEO Kim Woong of manipulating the online ordering system to make stores order two to three times the amount of products they actually needed.

The store owners also complained that the company sent products that were close to their expiration dates and that the irregularities were committed since May last year to help the company reach its sales goals.

“We will summon officials involved in the case after reviewing the evidence we secured,” Gwak told reporters.

“We will investigate whether Namyang has abused its power as a large company with a large number of small customers.”

Last week, a store owner surnamed Kim, 52, posted on YouTube a three-minute audio file of an alleged conversation between himself and a Namyang sales manager in his 30s.

On the tape, the sales manager pressured Kim to buy more products, saying, “I don’t give a damn about your stupid business.” When Kim complained about the company’s demands, the younger man said, “I don’t care if you are completely ruined. How dare you disobey my demands? I suggest you hide from me because I think I’m going to kill you if I see you.”

The audio file was recorded three years ago, according to Namyang.

After the YouTube file hit the Internet, some civic groups and citizens criticized Namyang and launched a boycott of its products. The company fired the sales manager who was recorded in the abusive tape and posted an apology under the CEO’s name on its Web site Saturday.

Some small supermarkets removed popular Namyang products like French Cafe from their shelves and posted signs that read, “We decided not to sell products from such a trashy company,” and “We provide Maeil Dairy’s products instead of Namyang’s.”

“I heard that the store owner in the audio file closed his business and suffered from panic disorders afterward,” a store owner who had a similar experience told the JoongAng Ilbo. “It’s happening a lot more than people can imagine.”