One morning last February, the 48-year-old owner of a day care center in Songpa District, southern Seoul, was picking up kids to drive them to the center. When some 2-year-olds started crying in the car, the frustrated manager just turned up the music on the car stereo.

“I thought my eardrums would burst,” said a teacher who was also in the car. “And it was hard for me to tolerate, imagine what it was like for the little kids. They must have suffered emotionally.”

The day care center owner obviously wasn’t fond of children. When one kid wouldn’t stop crying at the center, the owner put him in an empty room and draped a blanket over him. 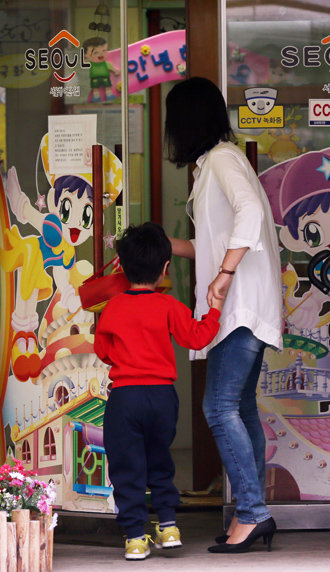 A day care teacher guides a student into a center Friday in Seoul. The owner of the center, which is certified by the Seoul Metropolitan Government, is now being questioned by the police on suspicion of embezzling government subsidies and charging extra tuition fees. By Kim Sang-seon

Following a scandal over abuse of children at a day care center in Busan, the Songpa Police Precinct and Songpa District Office jointly investigated 700 day care centers in Seoul and Gyeonggi and found more examples of abuse.

But the biggest problem discovered at the day care centers that were investigated was not physical abuse of kids but misuse of funds.

In the last two years, various levels of government have increased subsidies for day care for working families as part of Korea’s embrace of greater welfare benefits. Nationwide, the day care budget last year increased by 35.8 percent compared to a year earlier.

But now, many day care facilities were found to have misappropriated state subsidies.

The joint investigation found that at least 10 billion won ($9.1 million) in state subsidies among the 700 child care centers in Seoul and Gyeonggi areas were siphoned off into pockets of the owners. The report didn’t say how many centers were suspected of embezzlement.

According to the police, each of the misbehaving 700 day care centers misused funds of between 50 million and 500 million won in government subsidies. They also took in extra fees from parents to allegedly provide special programs for the kids.

One mother who works at an IT company sent her two children to a day care center in Songpa District. The mother, who asked that her name not be printed, said she was confident about the quality of the day care center because it was certified by the Seoul Metropolitan Government.

The owner of the center, however, is now being questioned by police on suspicions of embezzling government subsidies and extra tuition fees.

Under guidelines by the Ministry of Health and Welfare, day care centers are prohibited from providing extracurricular programs for children under 24 months, but many do so to make money. To make it worse, some centers warn that their kids will be neglected if they don’t sign up for the extra programs.

“I was told by the day care center to send in 50,000 won a month for an extra program when my first child was younger than 2 years old,” said the mother. “They said it was for a massage session for babies. I was speechless, but I was also worried that my child would be treated badly if I said no.”

The Songpa Police Precinct said they found hundreds of similar cases. One center in Gangdong District, eastern Seoul, told parents it had special instructors coming in for special sessions twice-a-week and demanded extra fees for them.

In fact, a guest instructor came in for 20 minutes a week.

Parents are now growing mistrustful of day care centers, even those certified by the city government.

As of April, there were 6,700 day care centers in Seoul, 2,400 certified by the Seoul city government.

After an investigation, the JoongAng Ilbo discovered that day care centers were notified in advance by city government officials before evaluations were performed. As a result, they had several days to fix or cover up practices that aren’t legitimate.

“Two to three officials check hygiene conditions and how the programs are run throughout the day as well as program content and the account books,” said a 31-year-old former day care teacher who just quit her job.

“But as we were always told a few days in advance about the pending investigation, we got rid of any issues that officials might object to and prepared ourselves to be at our best,” said the former teacher.

“During the evaluation period for city government approval, a day care center transforms into an ideal place for children,” said a 34-year-old teacher who works in southern Seoul’s Gangnam District. “But not so long after the evaluation, the center returns to its pre-evaluation ways.”

The police have been surprised how rampant the unethical practices are among day care centers in the capital. “As we dug deeper and deeper, more and more irregularities emerged,” said a police official at the Songpa Precinct. “We need a comprehensive overhaul of the day care center system.”