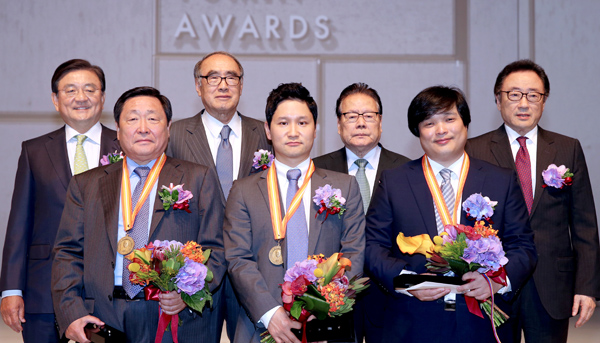 The fourth annual Yumin Awards were bestowed upon three Koreans yesterday in the open hall of JTBC, a television station run by the JoongAng Media Network, in Seoul. From left in the front row are award winners; rapper Psy’s father Park Won-ho (on behalf of Psy); Kwon Sung-hoon, a professor at Seoul National University; and Kim Seung-geun, a traditional music professor at Seoul National University. From left in back row are: JoongAng Ilbo Chairman Hong Seok-hyun; Lee Hong-koo, chairman of the Yumin Culture Foundation; JoongAng Ilbo adviser Lee O-young; and Sakong Il, chairman of the Institute for Global Economics. By Kim Sang-seon

The fourth annual Yumin Awards were bestowed yesterday on three Korean talents including K-pop sensation Psy in recognition of their achievement in the fields of science, society and culture during a ceremony at the open hall of JTBC, a television station run by JoongAng Media Network in central Seoul.

The awards were created in 2010 in memory of the JoongAng Ilbo’s co-founder and former chairman Hong Jin-ki and his emphasis on the role of creativity in society. Each winner receives 50 million won ($45,550).

Internationally renowned rapper Psy, whose smash hit “Gangnam Style” racked up the highest number of views on YouTube, became the winner in the category of Creative Society.

The judges cited the 36-year-old singer’s contribution to breaking down language and ethnic barriers and generating a universal appeal around the world.

“We highly praise Psy’s creative and unique dance movements that entertain and inspire so many people,” said Song Ho-keun, a sociology professor at Seoul National University and one of the judges. “We can call it ‘happy body language.’ Psy bridged differences in gender, generation and race and symbolizes the harmony that connects people around the world.”

The music video of “Gangnam Style” on YouTube was viewed from a total of 220 countries, higher number than the number of UN member countries, which is 193.

“I was so exhausted due to incessant performing,” said Psy in a video recorded for the award ceremony. “I will take this award as an impetus to work creatively and continue to contribute to the promotion of Korea to the world.”

In the category of Creative Science, Prof. Kwon Sung-hoon of Seoul National University won the prize for his achievements in the biomedical and electrical engineering field.

The 38-year-old professor’s research has been published in magazines such as Nature Materials, Nature Photonics, Nano Letters and Advanced Materials with more than 10 cover articles. His work includes developing a simple way of producing structural colors - the colors found on butterfly wings and peacock feathers - which can contribute to a high-resolution printing technique.

The judges took notice of disciplinary convergence in his research which encompassed micro particle studies and color printing technology.

Kim Seung-geun, a traditional music professor at Seoul National University, was honored in the category of Creative Culture for his effort to revive traditional Korean music in a modern way.

Kim is best known for organizing the Tongyeong International Music Festival in the namesake city in South Gyeongsang. The music festival is dedicated to the late composer Yun Isang (1917-95), who demonstrated an exceptional talent for combining traditional Korean musical techniques into his modern music. Yun’s hometown is Tongyeong, but he made his late music career in Berlin.

“We try to distinguish the awards from others by recognizing young talents in their early 40s,” said Lee Hong-gu, the chief judge and former prime minister.