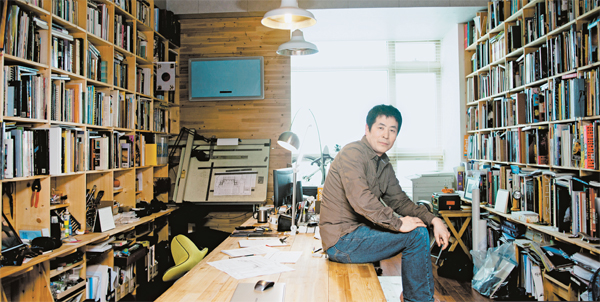 In theater, there are works that remain memorable forever due to the sets rather than the performance.

For example, the slanted revolving stages that told the tragic fates within the Joseon Dynasty in the musical “Empress Myeongseong.”

Then there’s the visual progression of a projection of a train turning into the real deal in “Hero,” and the transformation of a stonewall pavement to sheet music in “Gwanghwamun Sonata.”

Then there was “King Lear,” set in Gyeonghoeru Pavilion at Gyeongbok Palace, of all places. Behind all those productions that shocked the audience, there was the stage artist Park Dong-woo.

As someone who is not part of the cast, Park became the first crew member to take home the Lee Hae Rang award for his contributions. His works, “Empress Myeongseong,” and “Hero” dazzled fans in New York and were heralded by local media there as “a real spectacle.”

Park is dubbed as Korea’s authority on stage art, and rightfully so; as a key figure in the industry, he is one of the artists who plays his part in encouraging homemade productions.

From “Seopyeonjae,” which showcased light-colored paintings, to “The Days,” which incorporates curtains to portray hidden memories, Park has worked tirelessly to leave his mark in all that he’s ever done. Working away at his studio in Seocho-dong, southern Seoul, Park talked about his lifelong passion. 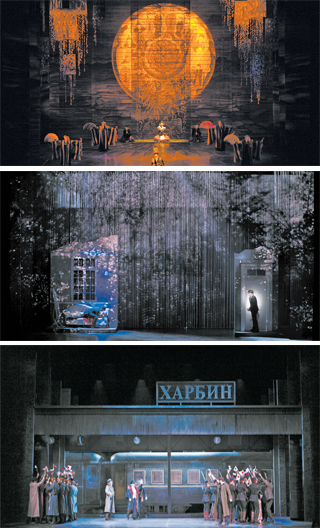 From top : Park brought to life “Empress Myeongseong,” a musical which incorporated hanji, traditional Korean paper, in its set design, In “The Days,” Park pooled threads together to make curtains depicting past and present events, The musical “Hero” incorporated a moving train on the stage, one of Park’s most famous works.Provided by JoongAng Sunday

His latest work, “The Days,” opened in early April; it was produced by the master of small theaters, Jang Yoo-jung of “Finding Mr. Destiny” fame.

Leading up to the opening, there was a minor controversy to do with the musical’s theme song. Many wondered whether a musical named after a song by Kim Kwang-seok would be able to stand on its own in the theater scene. Crucial to the debate was just how the stage would be utilized. Using thousands of threads pooled to form a curtain, the past and present were able to be represented side by side. The effect was a huge hit with fans, who loved the detailed and mysterious scenery.

Q. The stage looked as if it was draped in a veil. What were you trying to pull off?

A. I wanted to depict the overlapping of past and present events while at the same time highlight Kim Kwang-seok’s song. The fact that the musical had countless scenes [50 or so] was a challenge.

Was there any difficulty in fusing mystery and human drama?

In original works, sometimes they’ll add in an extra scene or place if it fits. For example, in “Hero,” the train scene was penciled in, despite it not being a part of the script. I learnt that in mystery musicals you can’t do that. Even the smallest alteration can disrupt the mysterious vibe of the set.

You said that in set design, the question, “Why are we putting on this show?” was important. What conclusion did you come to through your latest work?

With works written by a contemporary there is no major concern. It’s mostly in period pieces with various costumes that problems arise. For example, putting on a Shakespeare show in Korea is difficult. You have to construct an English castle and the actors have to put on wigs and act “Western,” this is called a “costume play” in theater.

If you had to ask the question “Why are we putting on this show?” toward such pieces, they would never be put on.

Last year in March I was reunited with Yoon Ho-jin through “Seopyonjae,” whom I worked with on “Empress Myeongseong” and “Hero.” Using jute drawing paper as the background, the spectacle was complete with music that complemented the stage perfectly. A hanji [traditional Korean paper] screen was produced for the show and again highlighted the beauty of Korean culture and art. Of course, prior to that, productions like “Empress Myeongseong,” “Hero” and “King Lear,” as well as the opera, “Orfeo ed Euridice” were praised for their fusion of traditional Korean elements.

It seems like you are really on a mission to make traditional Korean designs fashionable.

Again, it comes back to the question ‘Why are we putting on this show?’ In ‘Seopyonje,’ my biggest mission was to portray the four seasons of Mount Jiri through ink drawings. In “Orfeo and Euridice,” although it was based on Greek mythology, I didn’t want to just imitate the European style. But more than just making it Korean, I wanted to make it relatable to this land, at this time, so that the story didn’t seem so far removed.

You must spend a lot of time thinking about what is “Korean.”

Through traditional operas I realized there needs to be a framework to work by. In traditional Korean pieces the one thing that stands out is that pansori - vocals - are sung by a number of people, but there is no other structure to it. Thus, depending on who is directing it, it can vary: an opera director will portray it in an operatic style whilst a musical director will do so in his own way. If this is the case, then you have to wonder what makes it special. There should be a guide if the genre has to remain constant through the years. This is a problem to be tackled by the directors in unison.

Should the venue be of importance in putting on traditional Korean productions?

Hyopyul-sa, built in 1902, was the nation’s first theater intended for traditional opera. The royal family built it so that they could put on traditional shows for foreign envoys, and in many ways it was similar to a Shakespearean theater. It was round with three sections with a protruding stage, much like the Globe Theater in England. Theaters like that are best suited for traditional performances.

Because most traditional performances are presentational acting. In performances where reality is not important, the audience should surround the stage on all sides. The best example of presentational acting would be something like madangnori - traditional Korean outdoor performances. Madangnori makes no pretensions about representing reality. The players ride wooden horses. To exaggerate the humor, in such performances, the stage is completely surrounded by the audience on all four sides. It’s an informal layout with candy being sold before the show, players jumping into the spectators’ seats, and in the end everyone dances together.

How is the Japanese or Chinese theater different?

China’s Beijing Opera and Japan’s Noh are both iconic; the two are astoundingly similar to Shakespearean plays. The audience is aware that when they are watching “Hamlet,” that they are not at the palace where the story unfolds, but rather at a theater. They are in the mind-set that the actors are putting on a show and that they themselves are enjoying it. This is the crux of presentational acting. In pansori or traditional operas, too, they don’t rely on props to represent the moon but rather the actors point upwards to sing, “the moon has risen.”

Then in such productions, what is a set designer to do?

The set designers are not just responsible for painting or drawing on the set but making sure that the audience gets the most out of the theater experience. In the 2009 show, “Gertrude,” “Hamlet” was reinterpreted and instead of setting it against Elsinore castle, the setting was an Elsinore pub. The play was put on as if the audience was sitting at a tavern, and it is the job of set designers to facilitate such feats. To think that designers are responsible just for drawings on the stage is a narrow-minded way of looking at the job.

Japanese contemporary theater has been praised for its reworking of traditional style. What can you say about the Korean theater scene?

The first time we had built a theater of our own was in 1902. Thus, prior to that, it wasn’t possible to tap into the stage as a feature. From the 17th century, Japan had kabuki, before then the Noh was world-class too. For there to be a thriving theater life there should be surplus cash. Japan was doing well commercially, which meant that everyday people were able to pay for art, and in return theaters did their best to keep people coming. Because Korea wasn’t so well off, we weren’t able to do that. Furthermore, because we adhered to Confucianism more strictly than the Chinese, performances were reserved just for the palace or Confucian festivals.

What do you make of the great reviews that “Empress Myeongseong” and “Hero” received from abroad?

There’s probably many reasons, but in “Hero,” the scene where a train on a screen comes to life, that was something never before attempted on the stage, even in the West. Of course, a lot of challenges came with that. I drew on experiences from “Empress Myeongseong” to get the technique right.

You said that when you were younger, you were shocked after watching “Les Miserables.”

When Javert killed himself, that was new to me. He jumped off the stage and although it would have been a mere 10 centimeters (3.94 inches) down from the base of the stage, the way he extended his legs toward the ceiling, and along with the lighting, the revolving stage, it really felt as if he jumped into the Seine. It was moving not so much because it looked real, but because of the portrayal. That is what’s so great about theater. You know that it’s staged, nothing’s real but you get an immense satisfaction from seeing creativity at work. That’s the moment I knew what path I had to take in life.

-Took part in Festival d’Avignon in France in 1989 with “Waiting for Godot.”

-Since then, he has worked on about 200 plays, musicals and operas for over 20 years.

-Has won multiple awards at The Musical Awards and the Stage Design awards.

-Currently teaching at School of Drama at Chung-Ang University.