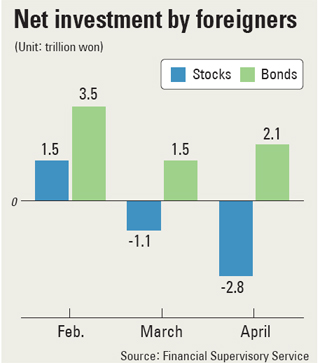 Their bond purchases in the same period, however, were 2.1 trillion won, signaling that foreign investors consider the Korean market part of their long-term investment strategy.

According to the FSS, foreigners sold roughly 2.8 trillion won worth of listed shares in April, an increase from 1.1 trillion won in sales the previous month.

By country, investors from mainly the European Union, including the United Kingdom and Luxembourg, increased unloading their shares, while those from the United States slowed down their selling.

Performance by major Korean manufacturers, including Hyundai Motor, the country’s largest automaker, deteriorated in the first quarter this year, mainly affected by the growing presence of Japanese rivals because the weak yen has made them more competitive.

However, the volume of Korean bonds held by foreign investors increased 2.1 trillion won last month to 97.4 trillion won compared to the previous month.

While in the United States, President Park Geun-hye emphasized that the lingering tension on the Korean peninsula will not affect the economy at large.

It is the third consecutive month that foreign investors have made net purchases of Korean bonds. France, the United States and Luxembourg were the top investors in Korean bonds.

“The move also comes as there are expectations that the benchmark rate will be lowered,” the FSS official said.

On Thursday, the Bank of Korea will hold a monetary policy committee meeting and decide whether to retain or lower the benchmark rate.