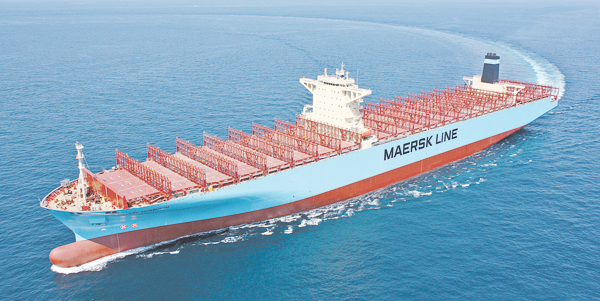 The 13,000 TEU Maersk Edinburgh delivered by Hyundai Heavy Industries in July 2010 is the world’s largest container ship. The order that HHI received from a Chinese company is for five 18,400 TEU vessels. Provided by the company

But as interesting as the size of the vessels that HHI will build, the industry also took note that the buyer is China’s second-largest shipping company, China Shipping Container Lines (CSCL). This is because China is Korea’s biggest rival in shipbuilding. Yet CSCL, instead of choosing a Chinese shipbuilding company, commissioned HHI.

China’s shipbuilding industry in recent years grew so rapidly in large part due to support from the government and its policy emphasizing exporting Chinese-made good on Chinese-made ships. Since about 2005, Chinese shipbuilding companies many times beat out Korean shipbuilders and claimed the top spot not only in number of orders but also the total cost. 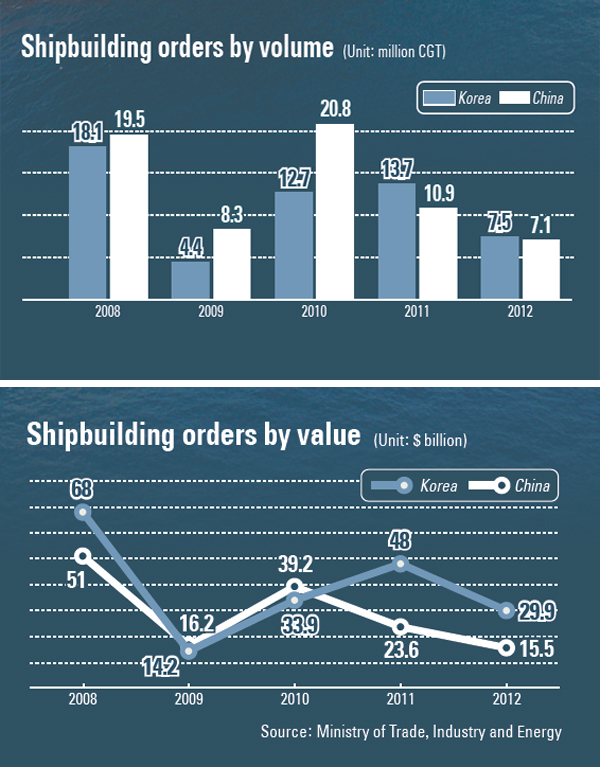 Last year, Chinese shipbuilders elbowed out their Korean counterparts, which had been No. 1 in the world in overseas sales for 12 years.

Despite the ferocious growth of Chinese competitors, not many in the Korean shipbuilding industry feel threatened. Last year, Korean and Chinese shipbuilders were neck and neck in total orders, domestic and foreign. Korea was slightly ahead total cargo volume with 7.5 million compensated gross tons (CGT), compared to China’s 7.1 million. CGT is an indicator of the amount of work that is necessary to build a given ship.

But in the area of total revenue, Korean shipbuilders brought in $29.9 billion, compared to $15.4 billion for the Chinese, indicating that Korean companies were building vessels of much higher value. Since 2011, Korean companies have been widening their lead over Chinese competitors by focusing on more lucrative orders.

Traditionally, in shipbuilding the most expensive vessels are the cruise ships.

Although Samsung Heavy Industries in the end did not move forward in constructing a cruise ship when it signed a letter of intent with a U.S. company, the estimated price would have been $1.1 billion.

However, other vessels and marine facilities worth more than cruise ships are popping up.

As international oil prices surged, orders on facilities such as FPSO excavating oil fields buried deep in the ocean started to gain popularity.

FPSO digs and stores crude from oil fields on the bottom of the ocean while floating on water. The LNG-FPSO pumps up, liquefies and stores natural gas.

LNG ships require advanced technology to store and transport natural gas that has been liquefied at minus 163 degrees Celsius (minus 261.4 Fahrenheit).

LNG-FRSU in recent years has been gaining popularity. LNG-FRSU is a facility that supplies gas dug up from the ocean directly to pipelines on land.

Drill ships haul crude oil in areas where waves are strong. Unlike FPSO, which needs a barge to move from one area to another, drill ships move around on their own.

Korean companies also have the lead in environmentally friendly, efficient shipbuilding technology. HHI’s green type engine has 7 percent better fuel efficiency than other engines. When mounting the engine in a 7,500 TEU container ship, it could save 80 billion won ($73.3 million) worth of fuel over 25 years.

A report by JP Morgan released at the end of last year stated that a 400,000-ton very large ore carrier ship manufactured in China used 17 percent more fuel than one made by DSME.

A Chinese shipping company getting an order for such a large vessel represents long odds.

A HHI official said that in the shipping industry, clients tend to place orders with companies with more experience as well as cutting-edge technologies, especially when it comes to large vessels. “[The Chinese shipping company] seems to have concluded that a Korean company met those criteria,” the official said.

China’s 1,600 shipbuilders, which have been focused on producing low-value vessels, now face eroding profitability due to worldwide economic malaise.

The industry will see many companies going out of business as the Chinese government plans to reduce the number to 500 within three years.

“Since there is a huge gap in technology, even after the Chinese shipbuilding industry undergoes a restructuring in the immediate future Chinese companies will unlikely be a threat,” said Kim Myeong-shin, an official at Korea Trade-Investment Promotion Agency’s Shanghai office.