Venerable professor lectures on the state of our democracy

Venerable professor lectures on the state of our democracy 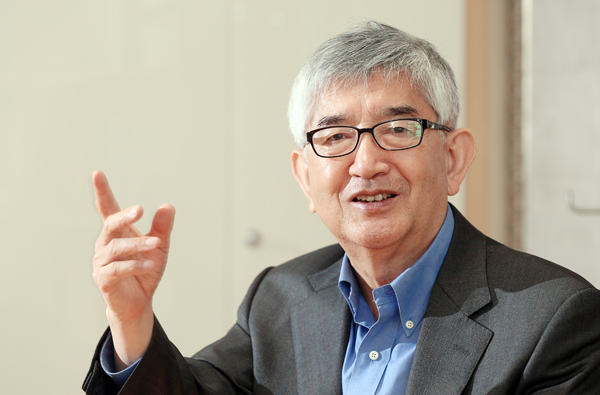 Few are as well versed about Korean politics and democracy as Choi Jang-jip, professor emeritus at Korea University and a veteran of progressive politics. He is 70 years old this year, nonetheless he observes the political situation in Korea as closely today as he has for the past 50 years.

On April 22, he published two books: a new book titled “Democracy as a Dispute” and a reprint, “What Kind of Democracy Is It?” Through the books he attempted to examine where Korea’s democracy stands; North Korean policies and unification theories prompted by nationalism; and criticism of the ruling and opposition camps after the presidential election last December.

Born in Gangneung, Gangwon, Choi began studying politics at Korea University a year after the student uprising of April 19, 1960, also known as the April Revolution. After earning a doctoral degree in political science at University of Chicago, he has been a professor at Korea University since 1983. The keyword in his mind for the past 50 years is “democracy,” and he has written a number of books on Korean politics, as well.

“After the introduction of democracy in the country, the students born in the 1960s to lead the student democracy movements failed to advance democracy through the formation of a political party,” he told the JoongAng Ilbo in a recent interview at his office in Gwanghwamun, downtown Seoul.

He said the presidential election was a result of that failure. On the Park Geun-hye administration, he said, “Although Korean society is at a transition point in many respects, Park Geun-hye is more of a president who plays it safe and puts emphasis on administrative control.”

Q. How would you grade Korea’s democracy at present?

A. Instead of talking about whether the Korean democracy “passed” or “failed,” I’d like to talk about what the Korean democracy is lacking. In days leading up to the presidential election, there were many discussions on “economic democratization” and “welfare.” I believe this is because no one so far has been able to come up with a development model that can be an alternative to existing economic management principles. I’m not saying that we should entirely do away with the current economy that revolves around chaebol. But I’m saying that we should pay more attention to areas that have been overlooked so far and haven’t been at the center of policies, and examine and develop them.

In the two books, you mentioned the importance of a political party rooted in the “world of common people.”

As I observed the legislative elections in April of last year and the presidential election last year, I felt that what defined Korean politics is the weak and limited role of political parties.

But, democracy cannot be realized without political parties. In particular, the country is in desperate need of a competent, skillful democracy that can resolve labor, social and economic challenges. In Korea, usually it is the bureaucrats who play that role.

However, the fact that it is the bureaucrats - who do not represent the voices of the society - that handle labor, social and economic issues is an indication that representative democracy and political parties are not working properly.

How do you assess the Park Geun-hye administration?

Korean society is going through a transition. We are seeing many side effects of economic advancement strategies that are export-oriented and highly dependent on family run, large conglomerates.

Although it is too early to say, it appears the Park administration is more of a government that plays it safe and focuses on administrative control.

Also, looking at Park Geun-hye’s nomination of her Cabinet members and aides, I don’t see attempts to embrace a wide scope of the Korean society.

However, it is encouraging to see some reform-mined members of the ruling Saenuri Party are attempting to have their voices heard. This makes me anticipate a ruling camp that is different from the previous ones.

What about the Democratic Party?

Whereas the ruling party is showing some dynamism and triggering anticipation, the opposition party is not displaying such changes. I am worried if the party will even be able to carry out its fundamental role.

It appears the gap between the ruling and opposition parties has become much bigger today than before the presidential election. It is because they are attempting to realize democracy not by strengthening the role of the political party, but through movements. Democracy is so much more than just resisting the authority.

There are debates about the identity crisis of the Democratic Party shifting too much to neutral. But the party did not lose the presidential election because it wasn’t progress enough or because it was too progressive. It was about people’s thoughts on whether or not the party was capable enough to propose reforms and translate them into action.

With the the video series “Hundred Years’ War in Korea” by a liberal organization, controversies surrounding former President Syngman Rhee are flaring up. What’s your view?

It’s an extreme form of ideology to see the history after Japanese colonization as a conflict between moral and immoral; national and anti-national; and cold war reactionaries and pro-North liberals.

Such a view is stuck in time, and it is not a right way to look at the times after 68 years have passed since 1945 (which is the year in which Korea was liberated from the Japanese).

I personally do not assess the Rhee administration positively. But the Korean situation then was divided by the cold war and you shouldn’t judge through today’s standards. Korea was a dominantly agricultural society, it had never experienced democracy and it was at the brink of war. So it isn’t right to criticize just why Korea couldn’t introduce Western democracy at such times.

It is meaningless to debate over who deserves more credit. Even if the ideas for Korea’s economic advancement were given by the United States, as alleged by the video, it is Park Chung Hee’s political capabilities that we should focus on. In other words, we should learn from his practical leadership from which materialized economic advancement.

I do not agree that we should completely reject the Park Chung Hee model. Although it is incomplete in that it oppressed democracy, I’d like to give it high points. Democracy wasn’t complete at that time, after all. Nonetheless, the result is that his oppression caused democracy activists to rise and topple his administration. Like it or not, that is our modern history.

South Korea is highly divided over the issue of unification. What are your thoughts?

Both the conservatives and the liberals want unification, but the methods they prefer are just starkly different. One supports embracing the North Korean system and affirming it, whereas the other calls for using the South’s predominant strength and absorbing it. One is what you call “conservative, nationalistic unification theory” and the other is “progressive, nationalist unification theory.” The division between the two is a problem that makes it hard to bring peace on the Korean Peninsula.

One thing I’d like to caution against is the call for unification that is deeply rooted in nationalism, which is the current North Korean policy. It is not helpful to the advancement of democracy, and it cannot bring peace to the inter-Korean relations, after all. Our priorities should be on stabilizing inter-Korean relations and seeking advancement of democracy within the country.