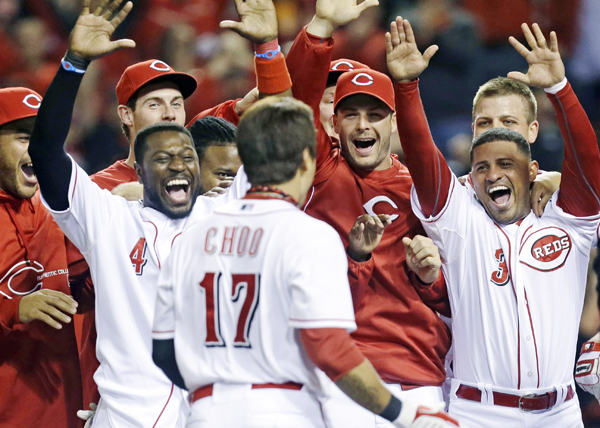 Choo Shin-soo homered twice against the Atlanta Braves Tuesday night, including a walk-off homer that capped off the Cincinnati Reds’ late rally.

The Reds won, 5-4 on back-to-back solo homers that pinch-hitter Devin Mesoraco initiated with two outs in the ninth. Choo completed it, thwacking the 154 kilometers per hour (95.6 miles per hour) pitch off Craig Kimbrel, one of the National League’s best closers, sending the home crowd at the Great American Ball Park into a frenzy.

“It was great, especially against the best closer in the league, Kimbrel,” said Choo, according to the team’s Web site. “It was a big game for us.”

The walk-off homer was Choo’s seventh homer of the season and 90th of his career. He hit another homer in the third inning, reducing the team’s 3-0 deficit by one.

It was his first career multiple-homer game this season. He previously belted two homers against the Seattle Mariners on Aug. 24, 2011. He is tied for the eighth in the home run race in the National League, trailing the major-league leader, Justin Upton of the Braves, by five.

His on-base percentage improved to .465, which put him atop the major leagues. He has scored 27 runs this season, which makes him the runner-up. His batting average also improved from .331 to .333.

“Choo has been so good for us,” Mesoraco told the MLB.com.

“It’s crazy how good he is playing and how good of a player that guy is. It’s fun.

“He never gives away an at-bat. You always know that, with him up there, we’re going to have a chance to get something going.”

Cincinnati’s offense has been struggling the last couple of weeks. The Reds were one strike away from another low-scoring loss after Kimbrel (0-1) fanned the first two batters in the ninth and went to a full count on Mesoraco.

Mesoraco hasn’t done much pinch hitting, but remembered something that manager Dusty Baker had advised about those pressure situations.

“Dusty says with two strikes, look for their hardest pitch away,” Mesoraco said. “I stayed on it.”

Center fielder Upton drifted toward the wall and jumped, the ball narrowly clearing his glove and landing in the first row at one of the majors’ most homer-friendly ballparks.

“That was incredible,” Mesoraco said of his first career pinch-hit homer. “I watched [Upton]. Once he looked up, it was a pretty good feeling.”

Kimbrel is only one save away from No. 100 for his career. He’d blown a save last Friday by giving up his first homer of the season, a shot by David Wright that tied it in the ninth. The Mets went on to win, 7-5, in 10 innings.

He gave up his second and third homers in quick succession Tuesday.

“All around, it’s frustrating,” said Kimbrel, who is 10 of 13 in save chances. “I’ve blown three saves. Those are wins we should have had.”

The comeback gave Dusty Baker his 1,600th victory as a manager, moving him ahead of Tommy Lasorda for 18th place on the career list.