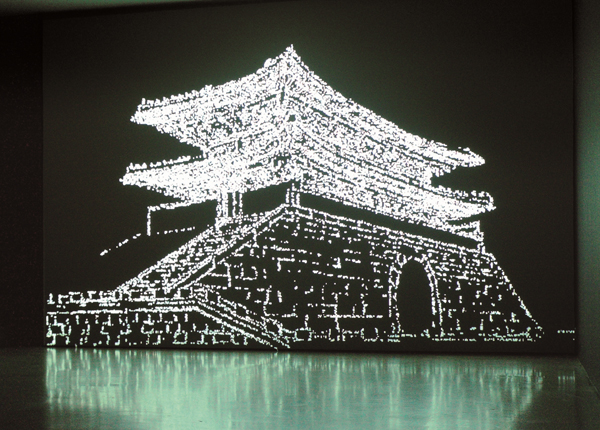 Korea’s National Museum of Modern and Contemporary Art (MMCA) said in a statement on Tuesday that the museum and the Seoul Arts Center have selected the five artists who can be regarded as successors to Korean-born artist “Nam June Paik’s legacy of artistic challenge and experimental spirit,” as the “Nam June Paik: Global Visionary” exhibition is going on at the Smithsonian museum.

Among them, Moon’s work, “Passage Sungnyemun III” visualizes the national treasure from various angles while its components are scattered and recombined.

“It prompts the viewer to contemplate upon the vestiges of time that exist within the vicinity of our daily existence,” the MMCA explained.

“As Paik’s visionary insights triumphed well beyond ‘art for art’s sake,’ Moon Kyung-won’s work depart from the predicaments of our society,” the museum said.

“She continuously questions the role of art through collaborative projects with artists from other creative arena.”

Moon won the Korea Artist Prize for collaboration with artist Jeon Joon-ho in 2012. They have been collaborating in the past few years on the question, “What can art do for society?”