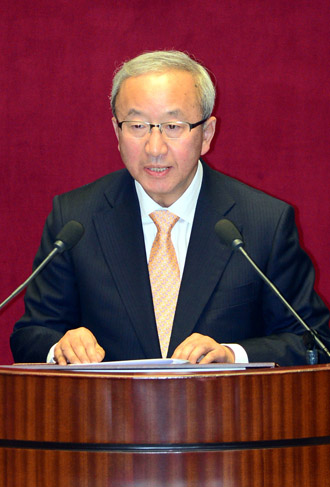 The government has accelerated its efforts to achieve a creative economy by starting to work on establishing a favorable investment environment for venture capital firms.

Finance Minister Hyun Oh-seok pledged to entrepreneurs, such as online game developers and animation producers, that the government will devise measures to promote investment in venture capital companies that are considered the essence of a creative economy. Hyun spoke during a meeting yesterday at the Korea Venture Capital Association in Guro, southwestern Seoul.

One measure being discussed to promote mergers and acquisitions is tax exemptions on companies or individuals that acquire venture capital firms. The Ministry of Strategy and Finance will announce this month a policy package to establish a favorable ecosystem for venture capital companies.

The key idea of the policy will be helping start-ups prosper and reinvest excess profits in another venture capital firm. “Failures should be utilized as assets, and support for bright talent is needed for such companies,” he said.

The minister decided to hold the meeting in order to encouraging innovative and challenging start-ups to play a role in Korea’s economic revival.

Establishment of Konex, a third stock exchange for venture start-ups, will be another part of the policy. By going public on the stock market, venture firms can attract more investment.

The government will also lower barriers for start-ups to enter the Kosdaq, the country’s tech-heavy stock market that currently bans venture capital firms with less than 1 billion won ($920,641) in net profit from being listed.

Hyun emphasized that the Korean economy needs a paradigm shift in order to prevent the current slowdown from becoming a chronic problem.

“If we don’t change the economic paradigm, slow growth will continue forever,” the minister said. “Although there are external and cyclical factors that have triggered the current slowdown, structural factors are playing a bigger role here.”