New Megabox not just for movies

New Megabox not just for movies 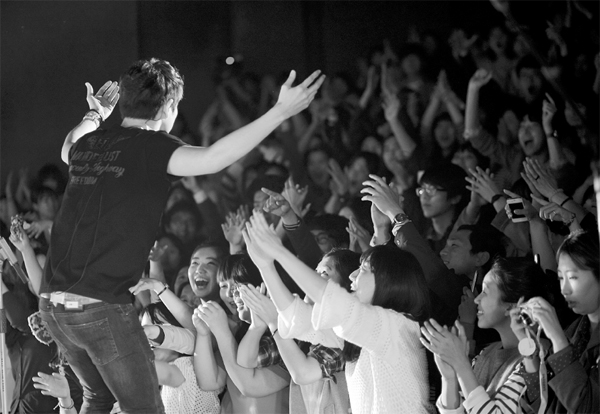 Jang Ki-ha and the Faces held its very first concert inside a cinema. Provided by Megabox

On April 26, indie band Jang Ki-ha and the Faces held a concert at a most unlikely venue: inside a Megabox cinema at COEX, southern Seoul.

The crowd went wild as Jang stepped up on the stage. In place of a film, pictures of Jang’s band were put on the big screen. After performing the hit song “Cheap Coffee,” Jang asked the crowd, “It’s my first time holding a concert in a cinema. How is it?”

“The song sounds a lot sharper,” said one fan, while another said, “It’s good to see your handsome face up close.” Others quipped, “It’s like a private concert.”

Pleased with the response, Jang went on to sing more songs.

When the performance was over, Jang urged fans to “come to the front of the stage,” and in no time, fans and Jang were jumping up and down as one.

Although an unusual spectacle to behold in a theater, the venue that Jang performed in was no ordinary screening room. The M2 theater is the preferred venue for Hollywood directors when they visit Seoul. It includes the Meyer Sound System, which means it’s as fit as concert halls.

World-renowned sound engineer Bob McCarthy installed the system, so M2 was built with much more thought than other screening rooms.

In theory, it is decked out in the same manner as Carnegie Hall, the Sydney Opera House, the Seoul Arts Center and the Sejong Center.

Jang’s concert was one of six in a series by a project titled “Box of Possibility” hosted by Megabox and SK Telecom.

Previous artists included Verbal Jint, Pond of Ice and Winter Play. Jang’s show was sold out ahead of time thanks to the good publicity following the prior shows.

One spectator, Lee Ji-yoon, 27, said that she had a blast, although it was a new approach to concerts.

“When he was speaking to the crowd, it was as clear as listening to the radio. When he sang, it sounded like I was in a small theater.”

The singer himself said that the show was a lot better than what he expected. “I thought it’d be strange because of the venue,” said Jang. “But it was a success, and I would hold another show here.”

But reinventing itself as a concert hall isn’t the only thing that Megabox has been doing lately. The space that has traditionally been reserved for movies is offering something to suit all tastes.

Kim Ji-eun, a full-time worker who resides in Ilsan, Gyeonggi, with her husband and child found out last weekend that her local Megabox is offering a day care service that offers her peace of mind when she wants to catch a movie with her husband.

Left: Patrons at Megabox COEX take in some art at the “Gallery Next to the Movies.” Right: The children’s library inside Megabox at Baeksok. Provided by Megabox

As someone who’s used to picking seats closer to the exit in case her child starts crying, Kim said she was surprised to find that her local Megabox at Baeksok in Gyeonggi had set up a children’s library.

After purchasing her tickets, Kim visited the library with her daughter, and with the help of a professional teacher, they took to reading some books together. After half an hour, when her daughter said she’d like to “stay with the teacher,” Kim could go ahead and watch a film, sitting next to her husband with peace of mind.

Kim’s daughter Seo-yeon spent two hours reading with the teacher, making little hearts out of origami paper and riding the slide. When her parents returned, she was the picture of contentment.

“I never imagined that I’d be able to leave my child behind to watch a movie at a cinema,” said Kim. Furthermore, she said that the ticket purchase process was “as easy as waiting at the bank,” and because of the child-friendly atmosphere, she said she would probably return frequently.

Megabox’s day care service is a new thing in Korea and was the answer to a question that the cinema asked itself: “How can viewers watch films in greater comfort?”

When they started seeing things from the viewers’ perspective, the team came up with many ideas. Their ideas include a hive-shaped lounge area for rest, a slide in the lobby, seats at the ticket booth in the style of a bank, a seat map within the theater and LED lights.

As part of the makeover project, cinema lobbies also underwent face-lifts from being plastered with neon signs and loud music to playing just classical music.

“From the beginning, we tackled the project from the patrons’ view and wanted to create ‘a space for rest,’?” said Lee. Seo and various managers also took the time to visit various cinemas throughout the nation to meet with patrons.

Park Ji-hoon who manages the Baeksok branch of Megabox, said that the makeover was “a hit with families.” He added that with the completion of an outdoor theater later this month, there will be a place where families can come and enjoy a picnic.

The new layout of Megabox cinema gives off a comfy “home” feel. The cinema is reinventing itself as a place not only to watch a movie but to take in art, ballet and opera, too. Last March, Megabox hosted an event where the public could learn about ballet and take in a professional performance under the “All That Ballet” project.

Some Megabox outlets like the one at COEX have also begun showing art and opera.

The “Opera at the Movies” project will see renowned shows by the New York Metropolitan Opera simulcast at Megabox locations. The Met has invested more than $90 million in a new stage and technology that will enable high-definition broadcasts of its performances. Tickets to the real deal cost between 100,000 won ($92) and 1 million won and often sell out six months in advance. More than 1,700 cinemas in 54 nations are on board for the project.