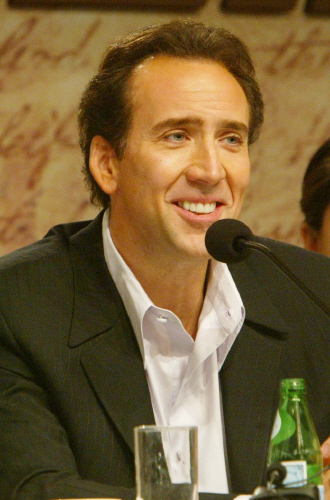 CARSON CITY, Nevada - A cameo by actor Nicolas Cage lent some pizazz to a hearing in the Nevada Legislature on Tuesday about a bill proposing tax incentives to entice filmmakers to the Silver State.

In a three-piece suit with slightly rumpled hair, Cage guest-starred in the Senate Finance Committee meeting as State Sen. Aaron Ford urged his colleagues to pass the film tax legislation.

“Nevada is an untapped resource in terms of its natural beauty and, frankly also its style and culture,” Cage told The Associated Press.

“There’s a magic in Nevada that applies to filmmaking in an excellent way.”

Despite the allure of filming in Nevada, the failure of lawmakers to include some sort of incentive for the film industry has resulted in lost revenue as the state continues to pull out of a recession, Ford said.

“Nevada should be a top destination for films, but unfortunately we are letting other states pass us by,’’ the freshman lawmaker told the committee.

The proposal would allow filmmakers to apply for up to $6 million in tax credits per production. If approved, the filmmaker could then sell that tax credit to another Nevada business to use as a discount on their taxes.

Each year, up to $35 million in tax credits could be distributed. Despite the lost tax revenue, supporters said the effort would boost the overall economy.

Cage said the lack of incentives is keeping him and other filmmakers from making more large-scale productions in the state.

“I have four scripts right now that could be shot in the state of Nevada,” Cage told lawmakers. He added that other directors are “tired of filming in other states. They want to show something new.”

The states filmed in American movies become the world’s picture of the United States, and states are being chosen now based on where the incentives are, said Cage.

“I want to request we make our beautiful state the new America to the international community,”Cage said.

But not everyone is singing praises of the bill. Some say the grandiose economic projections are really a fantasy that will end up costing the state. AP