Djokovic ousted in 2nd round at Madrid

Djokovic ousted in 2nd round at Madrid 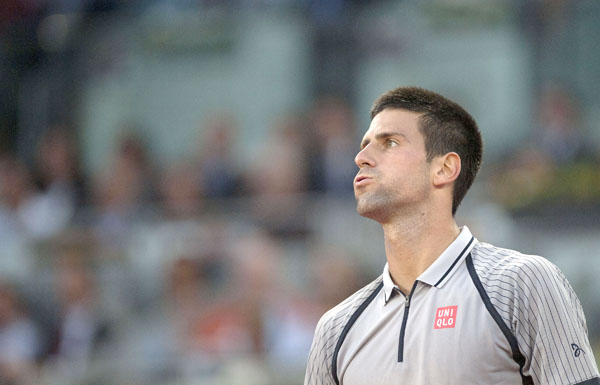 Novak Djokovic reacts during the men’s singles second round match against Grigor Dimitrov of Bulgaria at the Madrid Open, Tuesday. [XINHUA/NEWSIS]

MADRID - Grigor Dimitrov stunned Novak Djokovic in the second round of the Madrid Open on Tuesday, beating the top-ranked Serb, 7-6 (6), 6-7 (8), 6-3 for the biggest win of his career.

The 28th-ranked Bulgarian saved three set points in the first before taking the lead, and Djokovic then appeared to hurt his right ankle when trailing 4-2 in the second. The Serbian player slipped on the baseline and winced in pain, then immediately called for a trainer and took a lengthy break to get treatment.

The wait for the game to resume annoyed the crowd, who turned against Djokovic and began chanting Dimitrov’s name.

“I seriously didn’t expect that,” said the 21-year-old Bulgarian. “That was the one thing that, of course, cheered me up a lot.”

Djokovic - who ended Rafael Nadal’s eight-year winning streak at the Monte Carlo Masters last month - said the loss had more to do with poor preparation than an injury.

“I didn’t prepare myself so good,” Djokovic said. “For 12 days after Monte Carlo I haven’t touched the racquet.”

Djokovic said he didn’t understand why the crowd turned against him during the injury break.

“I don’t see any reason for that. I didn’t do anything bad,” he said.

The crowd then displayed sympathy for Dimitrov when he appeared to suffer from cramps at 5-5 with the game at deuce, visibly upsetting the Serb. Dimitrov, who suffered severe cramps last year at Roland Garros, said it didn’t affect him as badly this time.

“Today I was better, I was not crawling.”

The second-ranked Federer took a break after losing in the quarterfinals of the Indian Wells hardcourt tournament to Nadal, but instantly took to the slower red surface and broke early to take control of the first set. He then broke Stepanek three times in the second, losing his own serve once, to finish the win in 1 hour, 21 minutes.

“I’m very happy, because he has caused me difficulties in the past,” Federer said about the 34-year-old Stepanek.