Shippers desperate to get back on course

Shippers desperate to get back on course 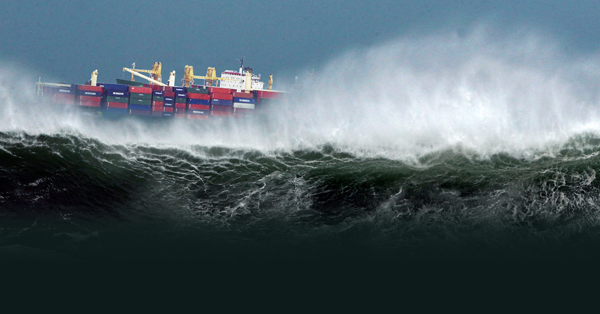 People in the maritime logistics industry say every day is a struggle to survive. Sea shipping has yet to get beyond the 2008 global financial crisis, with falling freight revenue accompanied by an excess of ships and rising fuel costs.

While experts are uncertain about when the market might bottom out and start to rebound, since 2008 more than 60 companies have gone through court receivership or debt workout programs. Others have gone out of business.

The government recently stepped up to help the troubled industry by establishing the Ministry of Oceans and Fisheries and by offering a plan to create a “shipping guaranteed fund” to provide financial support.

Nonetheless, many in the shipping industry question whether they can ever really escape the slump.

Left: Yoon Jin-sook, minister of oceans and fisheries, who was harshly criticized during her confirmation hearings, said the ministry will create a “shipping guaranteed fund” to boost liquidity for struggling companies. [NEWSIS] Right: To save fuel costs, Hyundai Merchant Marine has remodeled the bulbous bow of its vessel by 1.5 meters (4.9 feet). The shipper said it will reduce the circumference and weight to enhance fuel efficiency by more than 3 percent. Provided by the company

How bad is it?

AlixPartners Vice Chairman Al Koch, who is best known for the restructuring of General Motors in 2009, said in a recent press conference in Seoul that 44 percent of Korean shipping companies are “in danger of possible insolvency.”

Koch’s analysis seems to be no exaggeration, according to industry insiders. Almost all Korea shippers have been losing money in recent years.

While shipping company losses were expected to continue in the first quarter, analysts expect to see some slight year-on-year improvement.

As liquidity worsened at the beginning of the year, top bulk carriers STX PanOcean and KLC were put up for sale in the mergers and acquisitions market, but failed to attract any interest.

With no private buyer stepping up, Korea Development Bank’s?private equity team formed a task force to review the possible acquisition of?STX Pan Ocean. KLC, which has been going through court receivership, barely avoided stock market delisting and is still trying to stay in business.

Since the 2008 global financial crisis, the global cargo business has been suffering a serious slump due to rising costs and falling earnings.

In contrast, sea cargo fares plunged. The Baltic Dry Index, the daily average price to ship raw materials issued by the London-based Baltic Exchange, has dropped to nearly a fourth of what it was in its heyday in 2010.?For the first quarter, the index averaged 796, the lowest since the fourth quarter of 1986, according to the exchange.

According to Clarkson, a global shipping information provider, daily freight earnings from capsize fleets, which typically carry iron ore and coal, have averaged $5,591 so far this year, the lowest annual rate since 1998.

The rate is far below what is needed for companies to make a profit. According to London-based accounting and consulting firm Moore Stephens, capsizes need to earn at least $7,758 a day to cover operating expenses, not including fuel. Factor in loan payments and these vessels should earn $16,700 daily to break even, according to estimates by Pareto Securities AS.

Experts say the situation is largely self-inflicted. Shippers rushed to build up their fleets from 2003 to 2008, when emerging markets like China and Brazil were growing fast. According to the Baltic Exchange, global seaborne demand for dry bulk grew nearly 25 percent since 2008, but fleet capacity grew by more than 65 percent in the same period.

The situation for container cargo vessels is no different than for bulk carriers. The Shanghai Containerized Freight Index?(SCFI), published by the Shanghai Shipping Exchange (SSE),?is now around 1,050, compared to 1,500 last May.

“The economic slump in Europe and the United States shrank container cargo volume, but the biggest problem is the oversupply of ships,” said Yang Chang-ho, an Incheon National University professor who teaches Northeast Asia logistics. “The oversupply problem is expected to be solved around the second quarter of next year, and if the cargo volume continues recover until that time, the logistics industry could be healthy again.”

Although their credit ratings have declined, local companies in recent years have been issuing corporate bonds to generate liquidity. However, that strategy is backfiring.

According to a report from Hi Investment & Securities, the total value of shippers’ corporate bond debt is estimated to be 7 trillion won, and 2 trillion won in bonds is due by the end of the year. HMM has the largest burden (720 billion won), followed by Hanjin (634.1 billion won), STX PanOcean (399.4 billion won) and SK Shipping (241.9 billion won).

“Considering the size of their businesses, corporate bond debt seems excessive,” said Kim Ik-sang, an analyst?at Hi Investment & Securities. “Financial institutions have negative or conservative views on shipping companies since financial crisis, so these companies are in difficult with regard to bond refunding or issuing additional bonds.”

To avoid a liquidity crisis, companies have been selling their most important assets: ships.

Hanjin Shipping in March sold its Panamax container ship Diana Containerships of Greece for $22 million. The vessel named Hanjin Malta was built in 1993 and has a capacity of 4,024 TEU, or 20-foot equivalent units.

Although it has a new owner, the ship will be leased to Hanjin for at least 36.5 months at a gross daily rate of $25,550. This means that over three years, Hanjin will pay more than what it sold the ship for, but the company said it needed the cash.

HMM also is reportedly planning to sell an oil tanker to secure more than 20 billion won, while STX PanOcean intends to sell an LNG carrier for about 100 billion won.

Industry insiders said they had big hopes when President Park Geun-hye entered the Blue House because she pledged to revive the Ministry of Oceans and Fisheries. With the launch of the ministry that specializes in maritime affairs, people expected the government would put more resources into the maritime logistics sector, which accounts for nearly 70 percent of Korea’s entire logistics industry.

However, those hopes turned to disappointment with the appointment of Minister Yoon Jin-sook. The 57-year-old Yoon, who formerly headed the marine policy?research?division at Korea Maritime Institute, was criticized during the confirmation hearing after failing to answer basic questions about the ministry’s operation.

“I believe most people in the shipping industry are worried because Yoon is technically not an expert in maritime logistics,” a high-ranking shipping company official said on condition of anonymity. “It is questionable whether she can carry out the job properly, but we just hope that the government will come out with some support because this industry is closely connected to our economy.”

After her appointment, however, the ministry proposed a shipping guaranteed fund to underwrite bank loans and corporate bonds.

The industry welcomed the move in light of the government’s original idea for so-called “ship finance institution,” which Park revealed during her campaign. Shippers were concerned the institution would be concentrated on supporting manufacturing and offshore plants.

The shipping guaranteed fund is expected to be 2 trillion won. Industry insiders said that if government guarantees credit, the leverage from banks could reach 20 trillion won.

“We want the fund to go full operation as soon as possible,” said Yang Hong-geun, a director at Korea Shipowners’ Association.

According to sources, the government and other financial institutions will inject 1.8 trillion won for the creation fund, while asking shipping companies to put up 200 billion won through the end of the year. Industry insiders pointed out that since not many companies have enough cash, it will be almost impossible for them to come up with that amount, but they agree the fund is essential for shippers’ survival.

“In our heyday, we tried to start this kind of fund, but no one seemed interested because lots of companies were doing well,” said Yang. “Still, it’s better than nothing, and this is the right time to establish such a fund.”

But while the government appeared to be offering “sugar,” some shipping companies say they feel pressured by the National Tax Service (NTS).

According to industry sources, since last year the NTS has investigated at least 10 shipping companies for offshore tax evasion. Some companies, such as Daeyang Shipping, have already been asked to pay more than 47 billion won, while Polaris Shipping, which has annual sales of 500 billion won, is the object of an intensive investigation.

“It’s not that tax investigation is wrong, but in this difficult business situation, it is making matters worse,” said an official from local shipping company said. “Some cost-saving movements could be misunderstood as a way to dodge taxes, so the industry is under huge pressure.”

Stand on its own

Experts say that before expecting a help from the government, shipping companies first need to get their house in order and have sustainable business portfolios.

To increase revenue, shippers have been trying to raise freight fares, with little success in recent months. According to industry sources, Hanjin and Hyundai planned to increase fares this month on routes to the United States and Europe between $300 and $500 for an FEU, or 40 feet container units.

“We expect the market situation will improve in the United States after the second quarter,” said a spokesman at HMM said.

But to prepare for long term, shippers have been trying to reduce fuel costs by enhancing the efficiency of vessels.

Hanjin said it is running vessels under “eco-steaming,” which is basically cutting speed to save fuel, while adopting high-tech systems to calculate optimal routes. The company also said it is using special paint to reduce friction.

Hyundai last month remodeled the bulbous bow of its 8600-TEU container vessel to save fuel. The bulbous bow?is a protruding bulb just below the waterline that directs water around the hull. The remodeled bulbous bow is close to that of low-speed vessels. Hyundai said fuel efficiency will improve by 3 percent and save $600,000 per year.

“Future competitiveness of shipping companies will be determined by how many ‘eco-ships’ they own,” said Park Moo-hyun, an analyst at ETrade Securities. “In the used vessel market, the price is starting to be set around fuel efficiency of the ship, rather than its age.”

Industry observers said the shipping industry’s revival is crucial as it is closely related to ship manufacturing, steel and other industries. Some experts say this might be the time to strengthen ties among industries to foster future competitiveness.

“The local shipping industry has been sluggish on investing for the long term, so that’s why there is a vicious cycle of selling vessels in difficult times, while buying ships when business is booming,” said Hwang Jin-hoi, a director at Korea Maritime Institute’s Shipping Market Research Center. “Shipping, ship manufacturing and the steel industry, which are all suffering a slump, are connected. What’s important is that they put their heads together to find solutions.”