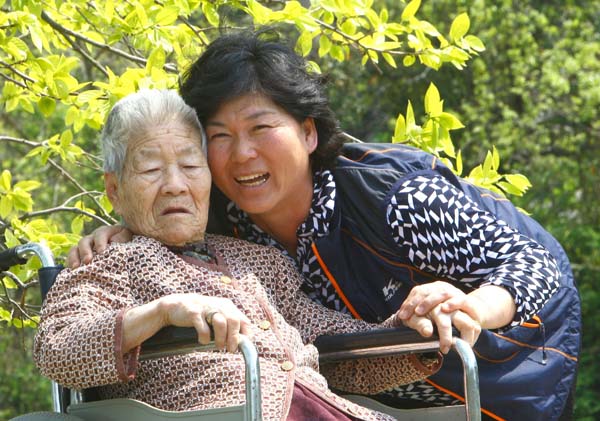 Park Eun-ok (right) was honored yesterday with the highest prize at the Filial Piety Awards for dedicating herself to caring for her mother-in-law, who suffers from dementia. By Oh Jong-chan

The Ministry of Health and Welfare rewarded 118 people for their filial devotion on Parents’ Day, which fell yesterday.

The winner of the highest prize was Park Eun-ok, 53, who has dedicated her life to caring for her 87-year-old mother-in-law, who has dementia.

As the dementia symptoms worsened, Park helped the elderly woman get in and out of bed and watched over her nearly 24 hours a day.

Despite the sacrifices she is forced to make, Park said she doesn’t want to take her mother-in-law to a nursing home. 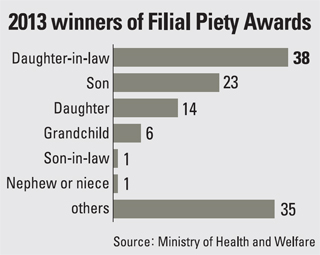 “Some people ask me why I don’t take her to a care center, but I want to take care of her as long as I can,” Park said from her residence in a small town in Gangjin County, South Jeolla.

“I feel sometimes it’s too much for me and become so exhausted, but now I have kind of come to terms with her dementia, and I can understand,” she said.

She recently earned a care worker certificate and was able to obtain a deeper knowledge about her symptoms of dementia.

“I learned how to communicate with her and how to care for people with dementia,” she said.

The JoongAng Ilbo evaluated the recipients of the Filial Piety Awards from 2010 to 2013, finding that daughter-in-laws like Park made up the largest percentage, and women outnumber men.

“Traditionally, the responsibility for taking care for the elderly parents has belonged to daughter-in-laws. It’s like they actually lead the family,” said Yoon Seok-joon, a preventive medicine professor at the Korea University College of Medicine.

Sixty-nine out of 118 winners are women this year.

Among the total winners for the four years, female winners account for 63 percent.

“The task of caring for older people usually goes to women and this is the case for the West,” said Chung Kyung-hee, a researcher at Korea Institute for Health and Social Affairs.

“But the difference is that it’s mostly daughters in the West and here daughter-in-laws take on the duty,” she said.

In Korea, the gender roles for taking care of the elderly have been clearly defined throughout the generations.

“Men are considered breadwinners, making money outside of the home. Women support older parents inside the house. This trend is reflected in the award results,” Chung said.

But in the case of Kim Moon-ja, 69, she fulfills her filial duty both as daughter and daughter-in-law.

She has assisted her mother, who has suffered from stroke and dementia symptoms for five years, as well as her mother-in-law, who has been suffering from degenerative arthritis for seven years.

Three foreign wives were honored for their dedication as well.

Among them is Yu Ye-rin (Korean name), who moved to Korea from Vietnam in 2004 after she married a Korean man.

Since then, she has cared for her parents-in-law, helping with daily activities.

Her father-in-law suffers a kidney ailment, while her husband’s mother is sick with back pain.

“When I first came to Korea, everything was tough because of the language. But now I feel honored to receive such an award,” she said.