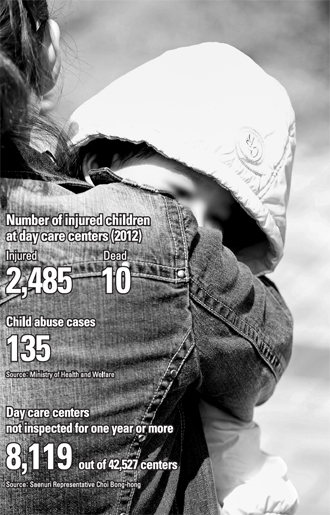 A mother who revealed irregularities at day care centers on an Internet bulletin board cuddles her 18-month-old daughter. By Oh Jong-taek

The mother of a 17-month-old girl began to send her daughter to a day care center in Busan last year. She trusted the facility because it was run by the local government.

But not long after enrolling the child, the mother, who asked that her name not be printed, noticed strange behavior by her daughter. She started hitting her mouth with her hands.

Recently, the news gave the mother the shocking answer of why her daughter was behaving strangely. Her child’s day care center is embroiled in a child abuse scandal.

One teacher is behind bars on charges of smashing a 1-year-old on her back, leaving bruises. The scandal has sparked concerns about how young children are treated at day care centers nationwide.

The mother thinks her daughter might have been emotionally affected from watching the jailed teacher smack children around.

“I am incredulous that people like this were running a public day care center,” said the mother. She believes local government authorities should also be held accountable for neglecting their duty to monitor the center after spending 900 million won ($828,900) to set it up.

Considering the numbers were gathered through the official reporting system run by the Welfare Ministry, industry analysts estimate the actual number to be much higher.

The government is not up to the problem, according to Representative Choi Bong-hong of the ruling Saenuri Party.

Choi revealed that a total of 8,119 day care centers nationwide were excluded from state inspections last year, 19 percent of the total of 42,527.

Among the unchecked 8,119 centers, 772 were not checked by authorities for the past three years.

The Welfare Ministry said that after inspecting 1,300 centers last year, it found that 772 committed fraud, such as faking accounts and class program content in order to secure state subsidies.

Experts blame loopholes in the law regulating day care services. Under the law, it is recommended that local governments conduct regular inspections, but it is not mandatory.

Day care centers can also operate without government certification, which is only recommended.

The loopholes have left many young children in the hands of unqualified personnel. It has also led to unregulated center owners embezzling government subsidies and illegally charging extra tuition.

“As we were told a few days before our inspection, we manipulated documents to present the center as an ideal place for child care,” said a 29-year-old teacher at a day care center in southern Seoul’s Songpa District, which is now suspected by the police of embezzlement.

Another teacher at a Songpa day care center told the JoongAng Ilbo that she was told by the owner to fabricate bank transactions using her computer skills in an effort to cover up embezzlement of government subsidies before an inspection.

“I knew it was illegal, but I had no choice because the owner would have fired me,” said the 27-year-old teacher, who asked for anonymity.

Industry analysts also say that whistle-blowing isn’t wise for teachers with consciences because owners don’t hesitate to lash back at whistle-blowers, who aren’t always protected by government inspectors.

“District officials came to our center last February after someone reported us,” said a teacher at a day care center in Songpa District, speaking on condition of anonymity. “The officials informed the owner that they came to know of irregularities from a whistle-blowing, prompting the owner to begin finger-pointing.”

“There is a blacklist circulating among owners,” said a 29-year-old former teacher who got fired in March from a day care center in Gangdong District, eastern Seoul, because she reported irregularities to the authorities.

“If you are suspected of reporting to regulators, owners take quick action to fire you and let other owners know your identity.”

“Far from taking measures to fix what needs to be fixed, some owners are laying off teachers and making sure those whistle-blowers will not be hired by other centers,” said a police officer at the Songpa precinct involved in the investigation.