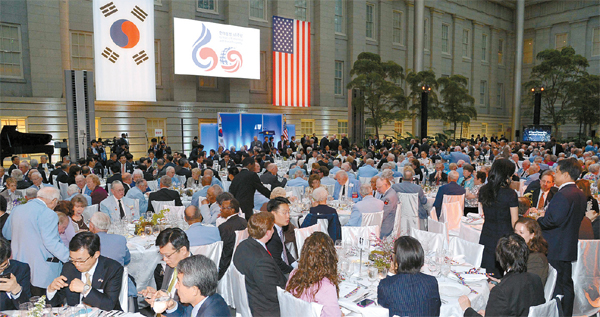 About 500 guests attend a grand dinner hosted by President Park Geun-hye at the Kogod Courtyard of the Smithsonian American Art Museum in Washington to celebrate the 60th anniversary of the alliance between Korea and the United States. [Joint Press Corps]

WASHINGTON - In a grand dinner hosted by President Park Geun-hye to celebrate the 60th anniversary of the alliance between Korea and the United States, Korea’s traditional and current culture and art were showcased before hundreds of guests, including Washington’s dignitaries and Korean War veterans.

The dinner took place at the Kogod Courtyard of the Smithsonian American Art Museum on Tuesday with about 500 guests from the two countries.

Among the 400 American guests were dozens of former and incumbent members of the U.S. government and Congress, scholars, businessmen, journalists, and 150 Korean War veterans.

The dinner was the only cultural event on the itinerary during Park’s four-day visit to the United States. The Blue House prepared a series of performances and exhibitions to promote Korean culture.

Park made “the flourishing of Korean culture” one of her key national agendas in her inauguration speech, and the presidential office went the extra mile to prepare the event.

“Taking into account Park’s style of not being fond of ostentatious events, the dinner was to be an exceptional event,” Ju Chul-ki, senior secretary for foreign affairs, said of the scale of the celebration.

The venue at the Smithsonian American Art Museum was selected because the museum was hosting the exhibition “Nam June Paik: Global Visionary” to celebrate the Korean video artist.

The Blue House said it also prepared special programs at the dinner to introduce Korea’s young artists who will uphold the extraordinary spirit of Paik.

While the exhibition and performance featured the contemporary artists of Korea, the venue was decorated with traditional cultural elements.

Kim Young-seok, the hanbok (traditional attire) designer who created Park’s dress for her inauguration ceremony and the first ladies who visited Korea for the Group of 20 Summit in 2010, was in charge of decorations. He used hanbok materials to create the tablecloths and the traditional multicolor ribbon element to create napkin holders.

Flower arrangements at the venue also reflected Korea’s beauty by using traditional roof tiles. Park was also dressed in an ornate hanbok designed by Kim for the dinner.

Park has worn hanbok frequently to showcase Korea’s beauty. She was dressed in hanbok for her first event in the United States when she met with Korean residents in New York on Sunday.

“The Korea-U.S. alliance has evolved from a military alliance to an economic alliance,” said Seo Mi-gyeong, presidential secretary for cultural affairs. “With today’s event, we hope to expand the alliance into a cultural alliance.”

Earlier in the day, Park provided a photo frame, made of silver and jade, as a gift to U.S. President Barack Obama in time with her summit at the White House. The frame was also designed by Kim.