WASHINGTON - Leaders of South Korea and the United States demonstrated Tuesday their united front in dealing with a nuclear-armed North Korea, issuing strong messages to the communist regime to end its provocative behavior and take a different path.

Following their meeting and a luncheon, Park and Obama addressed the media in a joint press conference and stressed that they are on the same page against Pyongyang’s latest series of bellicose threats.

“If Pyongyang thought its recent threats would drive a wedge between South Korea and the United States, or somehow garner the North international respect, today is further evidence that North Korea has failed again,” Obama said. 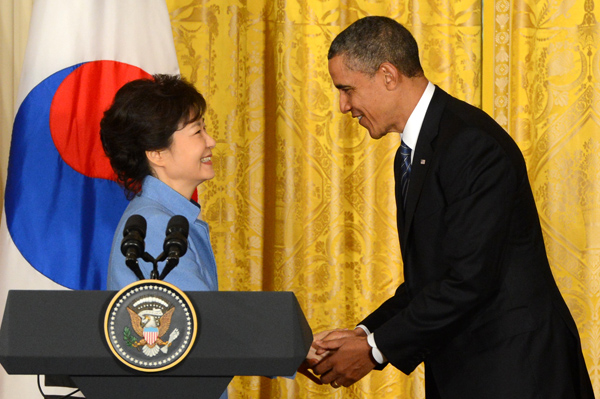 U.S. President Barack Obama, right, and President Park Geun-Hye, left, shake hands at the end of a news conference in the East Room of the White House in Washington, Tuesday. [AP/NEWSIS]

“President Park and South Koreans have stood firm, with confidence and resolve. The United States and the Republic of Korea are as united as ever. And faced with new international sanctions, North Korea is more isolated than ever. In short, the days when North Korea could create a crisis and elicit concessions - those days are over.”

Obama also expressed his support for Park’s North Korea policy, known as “trustpolitik” or “Korea Peninsula trust process.” Park has promoted a two-track approach of strong retaliation against any North Korean attacks, while leaving the door for dialogue open.

While some observers in Washington worried that her policy could be a challenge for the Obama administration to tackle the North Korea crisis, the U.S. president made clear after the summit that he fully supports her method. It was Obama’s first public and direct validation of Park’s policy.

“President Park’s approach is very compatible with my approach and the approach that we have been taking together for several years now,” Obama said.

“President Park and myself very much share the view that we are going to maintain a strong deterrent capability; that we’re not going to reward provocative behavior,” he said. “But we remain open to the prospect of North Korea taking a peaceful path of denuclearization, abiding by international commitments, rejoining the international community and seeing a gradual progression in which both security and prosperity for the people of North Korea can be achieved.”

At the news conference, Park also said she won’t tolerate any action by Pyongyang to harm the safety of the South Korean people, reiterating her complete trust in her military’s judgment to respond to any aggression by the North.

She also stressed that Seoul and Washington will work jointly to induce Pyongyang to make the right choice through multifaceted efforts, including her trust-building policy.

“I take this opportunity to once again send a clear message,” Park said. “North Korea will not be able to survive if it only clings to developing its nuclear weapons at the expense of its people’s happiness. Concurrently pursuing nuclear arsenals and economic development can by no means succeed.”

Park also said Pyongyang is now paying for its breach of inter-Korean agreements because its action prompted the South to withdraw from the Kaesong Industrial Complex and Pyongyang ended up losing its rare investor. “So I think in this regard, they’re actually paying the price for their own misdeeds,” she said.

The two leaders also stressed that the unwavering alliance between the two countries will serve as an important deterrence against the North and linchpin of peace in the region. In time with the summit, the two countries adopted the joint declaration in commemoration of the 60th anniversary of the alliance and stated their commitment to further strengthen ties.

“In this regard, I believe it is significant that the joint declaration on the 60th anniversary of our alliance we spelled out the direction that our comprehensive strategic alliance should take.”

According to the joint declaration, the two countries agreed to strengthen and adopt the alliance to “serve as a linchpin of peace and stability in the Asia-Pacific and to meet the security challenges of the 21st century.”

It also reaffirmed the U.S. commitment in the defense of the South, including through “extended deterrence and the full range of U.S. military capabilities, both conventional and nuclear.”

The joint declaration also stated that the two countries will work together for peaceful reunification of the two Koreas, including through the trust-building process initiated by Park.

The two countries also stated that the alliance has become a global partnership, and the United States welcomes Korea’s more active role in the international community. The joint declaration also expressed expectation for the alliance’s role in shaping the future of Asia for the generations to come.

In a move to upgrade the two countries’ global partnership, the two leaders discussed Park’s “Seoul Process” in building a framework of peace and cooperation in the Northeast Asia region, Yoon Chang-jung, Park’s spokesman, said.

The idea is to engage the United States, China, Russia and Japan through nonpolitical multilateral cooperative initiatives to build up trust first and expand the scope to the political arena.

Improving the Seoul-Washington partnership in other global agendas such as climate change and development assistance cooperation was also agreed upon, Yoon said.

Park and Obama also said at the news conference that the two countries are taking steps as planned so that Washington will hand over wartime operational control of the South Korean troops to Seoul in 2015.

They said changes will be made to reinforce the combined deterrent capabilities of the countries, trying to dissuade concerns on possible security weakness after the handover.

In addition to the security issues, Park and Obama discussed efforts to expand economic ties.

At the media conference, Obama said he agreed with Park to fully implement the Korea-U.S. free trade agreement, which took effect last year.

“It will boost U.S. exports by some $10 billion and support tens of thousands of American jobs,” he said. “And obviously it will be creating jobs in Korea, as they are able to continue to do extraordinary work in expanding their economy and moving it further and further up the value chain.”

The two leaders also discussed the sensitive issue of rewriting the civilian nuclear energy deal and agreed to conclude it as fast as possible.

“Given the importance of a peaceful nuclear energy industry to South Korea, we recently agreed to extend the existing civilian nuclear agreement between our two countries - but we also emphasized in our discussions the need to continue to work diligently toward a new agreement,” Obama said. “As I told the president, I believe that we can find a way to support South Korea’s energy and commercial needs even as we uphold our mutual commitments to prevent nuclear proliferation.”

Yun said the two leaders strolled along the walkways along the Rose Garden for about 10 minutes without interpreters for a candid exchange.

Yun added that Park’s address before a joint session of the Congress, scheduled for Wednesday morning, local time, was also a rare opportunity for a leader who came to the United States not for a state visit, indicating Washington’s high expectations in the new Korean administration. Park’s trip is an official working visit.

“It was their first meeting, but they built strong trust, friendship and a bond,” Yun said. “It served as an important event for the two governments’ relations for the next four years.”

Yun also said Park brought up the issue of Japan’s latest attempts to deny its military past and abandon its pacifist Constitution.

“She told Obama that Japan must perceive history correctly for the sake of peace in Northeast Asia,” Yun said.

In time with the Park-Obama summit, the two governments also agreed on three specific programs to deepen the two countries’ cooperation in areas outside the military alliance.

Seoul and Washington adopted a joint declaration on energy cooperation and agreed to create a new vice ministerial-level policy consultative body for information, communication and technology in order to cooperate in creating a new growth engine for the future.

To better assist the two countries’ civilian exchanges, Seoul and Washington agreed to work together to increase the professional visa quota for Koreans to work in the United States.

To increase the quota by more than 15,000 a year, Seoul obtained Washington’s backing to push forward with the revisions in the U.S. immigration law.

Bills are currently pending at the Senate and the House of Representatives, and presidential spokesman Yoon said the Obama administration’s support will be a great help.

The two countries also agreed to extend the Korean university students’ 18-month-long study-abroad and internship program for five more years. The program, established during the administration of Park’s predecessor Lee Myung-bak, was originally scheduled to expire this year.

To improve the two countries’ global partnership, Seoul and Washington adopted a joint statement on their efforts to counter global climate change. A memorandum of understanding to improve cooperation between Koica and the U.S. Peace Corps was also signed.