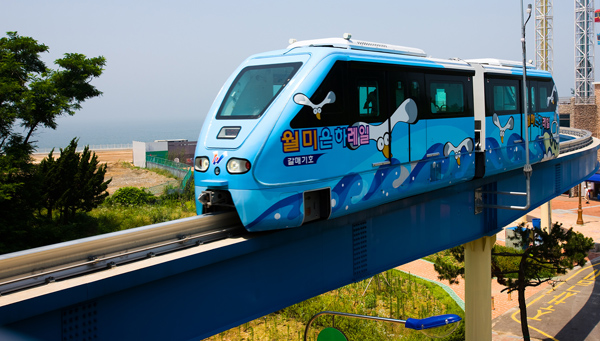 The 85.3 billion won ($78.3 million) Wolmi monorail was created to bring more tourists to Incheon, but has failed to begin operation due to safety problems and might get torn down.

The final result of the safety diagnosis that the Korea Railroad Research Institute (KRRI) is currently conducting will come out next week at the latest. The Incheon city government will decide the fate of the monorail based on the KRRI’s report, but many officials in the city government judge that removing the Wolmi Eunha (Galaxy) Rail is a fait accompli. Though the city government wants to operate the monorail, it appears to be wishful thinking.

When the city government had a trial run for the media on April 30 on the 6.1-kilometer (3.8-mile) line between Incheon Station and Wolmi Island, which took 33 minutes, many safety defects were discovered. The Wolmi monorail was created to run a course along the Wolmi Island seaside. Each train can transport up to 70 people and runs up to 25 kilometers (15.5 miles) per hour.

Due to poor rail design, the monorail shook more than a normal subway or train and generated a great deal of noise. “There are also problems with the structures that support the railway,” Lee Chan-won, director of the Eunha monorail project division from the Incheon Transit Corporation, told the JoongAng Ilbo.

Defects were also found when the monorail operated in automatic driving mode, suddenly stopping in the middle of the rail. This also happened during the April trial run when Song Young-gil, Incheon mayor, attended the event. “It’s not going to work like this,” Song was quoted as saying at the event.

Some believe that the defects are fixable, but finding the funds might be difficult. “It might cost more to repair the problems than the money required to operate it,” a spokesman of the Incheon’s transit company said.

It is also a burden to completely remove the monorail. The city government estimates that it would need to spend an additional 25 billion won of taxpayer money to tear it down. A regional election will be held in July 2014. Some representatives of Incheon citizens doubted its safety when they went on a trial run last month.

“They haven’t operated it for almost three years,” one of the representatives said. “I seriously doubt it will operate well.”

There are opinions that suggest utilizing the monorail in another way.

Some officials at the Incheon Transit Corporation suggested operating rail bikes or turning it into an elevated trail (the monorail is built seven to 18 meters, or 59 feet, above the ground).