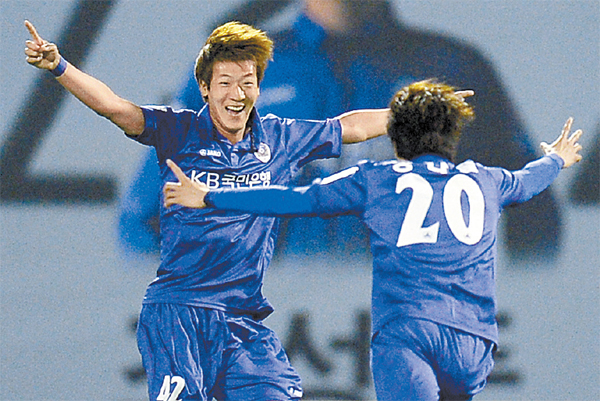 Anyang FC’s Jung Jae-yong, left, celebrates after scoring against the Suwon Bluewings in a third-round match of the FA Cup in Anyang, Gyeonggi, Wednesday. The Bluewings rallied to beat the K-League Challenge club, 2-1. [NEWSIS]

Last-place Daegu FC sought to end its winless streak this season, but Kim Han-won of Suwon FC scored on a penalty shootout earned in the stoppage time, seeing the home side to the door. Suwon FC is in sixth place in the eight-club K-League Challenge with one victory, three losses and three draws.

The Daejeon Citizen also lost to Challenge side Goyang Hi FC, 1-0, at home on Wednesday after Jin Chang-soo scored the winner in the 36th minute. No clubs from the lower divisions, however, survived into the round of 16.

The other teams from the K-League Classic, including its two former members, earned a berth to the round of 16, but not without a challenge.

Gwangju FC, which was demoted from the Classic, came back from a 2-1 deficit to beat fellow Challenge side Chungju Hummel FC, 3-2. Kim Eun-seon evened it at 2-2 in stoppage time, and Park Hyun scored the winner in the 15th minute of the second half of the extension. The Challenge side Sangju Sangmu Phoenix, anther relegation team from the top flight last year, sank Mokpo City, 4-1, on two goals by Ha Tae-kyun and goals by Kim Dong-chan and Lee Sang-hyup.

Gangwon FC edged Gyeongju KHNP, a National League side, 3-2, in overtime while the Seongnam Chunma beat Dong-eui University of Busan, 4-2, also in extra time. The Chunnam Dragons were drawn through overtime by Gangneung City of the National League. The Dragons managed to win, 10-9, in the penalty shootout.

The Suwon Bluewings also had to wait until the last minute to turn the tables against FC Anyang, a Challenge club. The current K-League runner-up trailed Anyang after Jung Jae-yong gave Anyang a 1-0 lead eight minutes into the second half, but Anyang offset the lead with an own goal in the 87th minute, and Seo Jung-jin scored the winner for Suwon in the injury time.

The Pohang Steelers got off to a cruising start of their title defense with a 4-0 thrashing of Soongsil University at home. Lee Myung-joo opened the scoring at Pohang Steelyard, Cho Chan-ho added two goals and Bae Chun-seok sealed the victory.

Jeju United fended off a late rally by Konkuk University to win, 2-1.

The first round of the 2013 FA Cup was held on March 10, pitting college teams and Challenge teams against each other. The survivors then advanced to the second round on April 13 and 14, where they were joined by the teams from the National League and K-League Challenge.

Four of the six Challenge teams advanced to the third round, but the two other clubs, Bucheon FC 1995 and the Korean Police FC, were stunned by Challengers’ Jeonbuk Maeil FC and Soongsil University. The 14 K-League Classic clubs and the two relegation teams, Sangju and Gwangju, joined the FA Cup in the third round. The fourth round will be held on July 10.