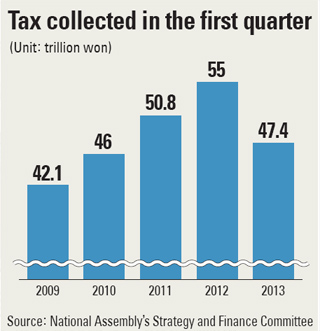 A patent agent last year had to cough up 8.6 million won ($7,877) in income tax on an 11 million won commission he received, but did not report, for registering a foreign company’s patent rights in Korea.

The tax office put the patent agent under its microscope because of excessive spending on overseas trips that was out of line with his reported income, which was much lower than average for his occupation.

Additionally, he lied about business expenses, including monthly wages to his spouse who didn’t work at his office.

The National Tax Service (NTS) said yesterday it is tightening its crackdown on high-income professionals who underreport their earnings.

The move comes as tax revenue has fallen sharply this year. In the first three months, 47.4 trillion won in taxes was collected, 14.5 percent less than the same period last year. It is the first time that has happened since 2009.

The tax agency said last year it was able to collect 44 billion won from 6,245 people among the 7,200 people that were under intense investigation on suspicion of evading taxes. Furthermore, 300 people were singled out for regular investigation.

This year, the tax office plans to increase those under tightened scrutiny to 10,000, a 40 percent jump.

People under intense investigation are those who encourage customers to pay in cash or who claim business expenses for what is actually personal spending.

Those who work at companies or organizations do not have to turn in a separate income report to the tax office.

The income report has to be turned in by the end of this month, either via the tax office’s Web site or smartphone app.

“The best way to save on taxes is to make honest reports,” said a tax agency official. “The purpose of [investigation] is to solidify the foundation of a fair society.”

The official added that those who honestly report their income will not be subjected to intense investigation and offered various benefits, such as exempting a portion of loan interest.

“But those who dishonestly report their incomes will not only be investigated, but have to pay additional taxes for their actions.”