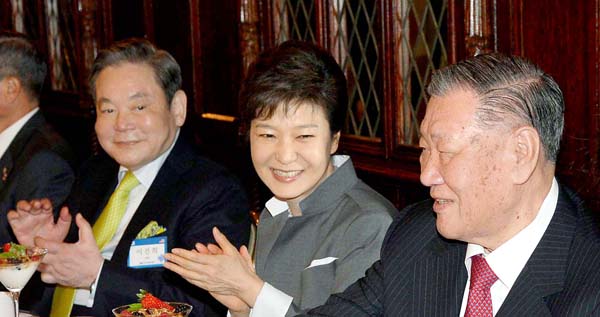 WASHINGTON - President Park Geun-hye promised her government would make efforts to look into the problems associated with the monthly wage dispute and weakening Japanese yen to keep major investors in Korea.

Park met Wednesday with a group of Korean and American business magnates at roundtable discussion and a luncheon hosted by the U.S. Chamber of Commerce.

At the meeting, General Motors Chairman Daniel Akerson made an appeal to the president about the difficulties in running business in Korea due to the monthly wage dispute and the weakening yen, Cho Won-dong, presidential senior secretary for economic affairs, told the reporters.

“At the roundtable meeting, Chairman Akerson reaffirmed that his company will fulfill its February announcement to invest $8 billion in Korea,” Cho said, calling it the “biggest outcome of the discussion.”

In February, General Motors announced a grand plan to invest $8 billion in Korea over the next five years to build a design hub for Asia, but Akerson later showed concerns about the North Korea risk. In his interview with CNBC, Akerson said General Motors was “making contingency plans for the safety of our employees” in the country to the extent that it can to prepare for the escalated inter-Korean tensions.

According to Cho, Akerson told Park that he will never “abandon” the Korean market if two issues are resolved. He pointed out the weakening yen and the ongoing controversy surrounding the monthly wage as major obstacles for his firm’s operation in Korea.

The monthly wage serves as the basis to calculate the severance pay, and including the bonus payments in the monthly wage will largely increase the burden of the company.

The American carmaker is in a court battle against the employees of GM Daewoo over the scope of the monthly wage and the case is currently pending at the Supreme Court.

After GM Daewoo reformed its wage system between 2000 and 2002 and excluded bonus payments from the monthly wage, workers filed a lawsuit to seek a change and they won the initial trial and the next round of appeal.

“This is an extremely difficult issue,” Park was quoted as saying by Cho as she responded to Akerson. “This is not a problem of GM, but a problem of the Korean economy, so I will make sure to resolve it.”

Cho also said she promised to find a practical solution to the sensitive issue.

“It is inappropriate for me to say at this point how the government will handle this issue,” Cho said. “But I can say strongly about the need to resolve this problem.”

At the roundtable and luncheon, Park also met with other American tycoons including Dennis Muilenburg, executive vice president of Boeing, Paul Jacobs, chairman of Qualcomm, and Marillyn Hewson, president of Lockheed Martin.

At the meetings, Park promised to lift unnecessary regulations to boost economic activities in Korea, and it will make Korea a more attractive investment venue for not only American businesses but other foreign investors.

Moon Jin-kook, president of the Federation of Korean Trade Unions, also joined the event and tried to ease the American investors’ concerns about labor issues in the Korean economy.

Earlier in the day, Park met with the heads of Korea’s top conglomerates at a breakfast meeting and expressed her appreciation for the tycoons of Korea for cooperating with her economic policy.

It was her first meeting with them as the president while the new administration has pushed forward tightened regulations of conglomerates to realize her “economic democratization” policy.

“It is gratifying that conglomerates have moved in a positive direction by ending their practices of giving special favors to their affiliates when making contracts and upgrading contracts for temporary workers,” Park said.

“It is also extremely beneficial that the top 30 business groups have announced their plans to create jobs and increase investments.”

At the head table, Samsung Electronics Chairman Lee Kun-hee sat to the right of Park, while Hyundai Motor Group Chairman Chung Mong-koo sat to her left.

“It is important to have an environment where conglomerates, midsize firms and start-ups can grow together,” he said. “Samsung will increase investments and jobs as much as possible to bring success to the creative economy and lead initiatives to strengthen our economy.”

The meeting was a rare opportunity for Park to communicate directly with the business tycoons. Her last meeting with the conglomerate leaders took place in December when she visited the Federation of Korean Industries as the president-elect.

In a different approach from her conglomerate-friendly predecessor Lee Myung-bak, Park has put pressure on conglomerates to live up to their social responsibility by investing and hiring more and cooperating with small business partners.