President turned heads with her fashion choices on U.S. visit

President turned heads with her fashion choices on U.S. visit 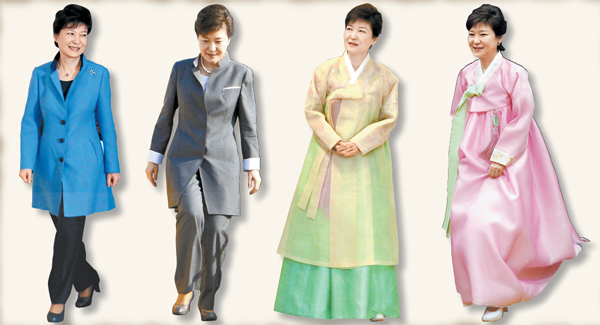 From left: President Park Geun-hye wore a blue jacket during the summit with Obama on Tuesday; a gray suit addressing a joint session of the Congress Wednesday; a hanbok with flower patterns during the dinner at the Smithsonian Tuesday; and a pale pink hanbok in Los Angeles Wednesday. [XINHUA/NEWSIS]

A female president always receives extra scrutiny over what she wears. Going on a high-profile tour like a U.S. visit only makes it worse.

The wardrobe President Park Geun-hye wore during her five-day U.S. visit is making headlines, with fashion critics and political observers trying to interpret what message she was attempting to deliver with her choices.

Experts say through her sharp yet minimalistic suits whose dominant colors were green, blue and gray, she attempted to portray strength and authority as the country’s commander-in-chief, while with her feminine and colorful hanbok, or traditional Korean clothing, she showed the beauty of Korea, as well as her softer side.

“Before, she seemed to prefer wider collars, but the suits she wore in the U.S. had thinner collars and a slimmer silhouette, making her look sharper and more modern,” said designer Lee Myoung-sin.

On a related note, Lee previously won an episode of “Project Runway Korea,” a fashion design audition TV show, in April which had the contestants make a wardrobe for Korea’s president on her overseas tour.

Lee’s piece, a gray suit with a white blouse, looks strikingly similar to what Park wore when she was giving a speech at the U.S. Congress on Wednesday.

But Lee said it wasn’t her work.

“I was surprised to see that, too. I was also honored,” the designer told the Korea JoongAng Daily. “I kept in mind how she prefers modest and simple looks while making my piece for the show.”

Jeong Jae-wu, a professor of fashion design at Dongduk Women’s University, said the key to Park’s fashion is in the jackets.

“For a female politician, a jacket isn’t just part of fashion,” he told the JoongAng Ilbo. “Pockets in jackets are a must. But jackets for women sometimes come without them because they carry purses. So jackets without pockets highlight femininity.”

It is a famous tale in the political circles how in 2007 - when Park was competing for the ruling camp’s ticket to run for the presidential election - she kept two speeches: one in the right breast pocket that she would read in case she won, and the other in the left in case she lost.

Meanwhile, keeping in line with the Blue House announcement after her inauguration ceremony in February that the Korean president will likely feature more hanbok, she wore three different pieces of the Korean costume during her U.S. visit.

All are the work of Kim Young-seok, who designed hanbok for Park during her inauguration ceremony.

Kim said in a phone interview with the Korea JoongAng Daily yesterday that he tried to convey with the white hanbok she wore in New York the passion of Korea’s first female leader.

“The red goreum [traditional bow] was the highlight with which I attempted to portray Park’s lifelong passion,” he said.

The hanbok Park wore at the celebratory dinner Tuesday at the Smithsonian American Art Museum in Washington, which had translucent floral patterns, was intended to accentuate Korean beauty in light of the U.S. veterans present who fought in the 1950-53 Korean War and who probably have a rather grim impression of Korea.

“Park always emphasizes that her administration is working to better promote the cultural elements and aesthetics of Korea overseas, so I did my best to convey the beauty and grace of Korea,” said Kim, who also prepared the table decorations and flower arrangements at the Smithsonian.