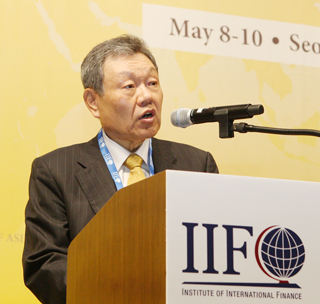 Euh Yoon-dae, chairman of KB Financial Group, raised concerns yesterday over a “sudden stop” in capital flows into Asian markets if developed countries pull out their capital after an improvement in the global economy.

“Last month, the World Bank warned that the risks of overheating were increasing in emerging markets [in Asia] as quantitative easing in developed countries spur capital inflows,” Euh said. “Should developed countries unexpectedly adopt an exit strategy upon world economic recovery, Asia’s emerging markets could be vulnerable to a sudden stop in capital flows, [and] large capital inflows would be followed by massive outflows.”

Euh made opening remarks at the annual Institute of International Finance (IIF) Asia CEO Summit that kicked off at the Westin Chosun in central Seoul with an informal dinner Wednesday.

The three-day summit, hosted by the KB Financial Group this year, is being attended by 120 representatives of the Asian financial sector including Timothy Adams, president and chief executive of the IIF; Nobuyuki Hirano, president and chief executive of Mitsubishi UFJ Financial Group; Anoop Singh, director of the Asia-Pacific Department at the International Monetary Fund; and Thierry de Longuemar, vice president of finance and risk management at the Asian Development Bank. Last year’s event was hosted by Bangkok Bank in Thailand’s capital.

The Washington-based IIF, an international financial organization, was established in 1983 to enhance cooperation among banks in response to the international debt crisis in Central and Latin America and Eastern Europe. Around 320 private banks and investment firms from 70 different countries are members of the IIF.

In his speech, Euh pointed out three major challenges for the Asian financial industry: an imbalance in growth of the financial sector as compared to the trade sector; weakness in foreign currency liquidity; and a lack of development in nonbanking and capital markets.

“The Asian financial industry remains underdeveloped relative to the active and developed intra-regional trade,” he said.

“The fact that Asian countries do not have a base currency means that any risk to U.S. currency liquidity can result in deterioration of Asian financial institutions’ borrowing availability,” he said.

Attendees were invited to participate in discussion sessions yesterday on various topics including the prospects and challenges in the Asian financial industry, cross-border financial flows and the role of bank and nonbanking financial institutions.

In a speech in the afternoon, Shin Je-yoon, chairman of the Financial Services Commission, emphasized cooperation among Asian countries.