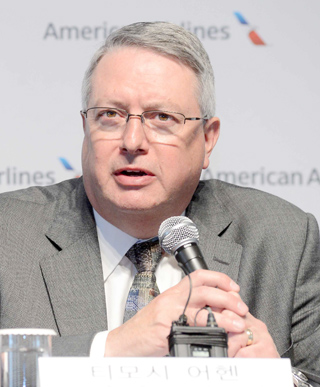 American Airlines has launched a nonstop flight between Seoul and Dallas, hoping to tap into Korea’s growing number of international air passengers.

Timothy J. Ahern, American Airlines vice president -­ New York and inernational, said in a press conference in Seoul yesterday the new route will begin with the inaugural flight today from Incheon to Dallas/Fort Worth International Airport.

American will use the Boeing 777-200 jet and operate daily. The flight departs from Incheon at 4:50 p.m., with the return flight from the United States arriving at 10:20 a.m. local time the following day.

“As one of the top 10 premium markets in the world, South Korea has long been an important market for America and by inaugurating new nonstop service to Korea, we will expand our global network further in the Asia-Pacific region,” Ahern said.

“Most customers want to travel to other cities, not just visit Dallas/Fort Worth,” he said. “Beyond traffic is very important to us as we look to grow this market.”

According to data released by the Ministry of Land, Infrastructure and Transport, international air traffic volume in the first quarter jumped 10 percent year-on-year to reach a record-high 12.51 million.

Korea’s aviation industry officials foresee that the traffic for United States will continue to grow. “Over the past 10 years, the average annual growth of passenger volume to and from the U.S. has been about 8.3 percent,” said Choi Hong-yeol, a marketing vice president at Incheon International Airport Corporation. “As the Korea-U.S. FTA goes into effect, demand for U.S. routes is growing.”