Park gets 41 bursts of applause

Park gets 41 bursts of applause 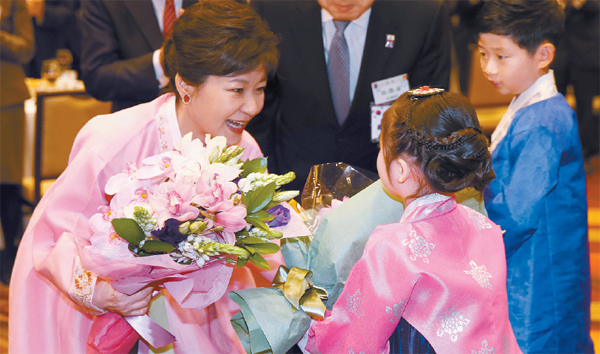 President Park Geun-hye receives a bouquet of flowers Wednesday at the Ritz-Carlton Hotel in Los Angeles where she met with overseas Koreans living in the area. On Wednesday in Washington, Park delivered an address to a joint session of the U.S. Congress before she left for California. [Joint Press Corps]

WASHINGTON - President Park Geun-hye addressed a joint meeting of the U.S. Congress and presented her vision for the future of the Korea-U.S. alliance, especially Korea’s multilateral cooperation initiative for the Northeast Asian region.

She also issued a strong warning to North Korea to give up its pursuit of nuclear weapons and concentrate on economic development instead.

Park gave a 34-minute speech in English before members of both houses of Congress at the invitation of House Speaker John Boehner. Park was interrupted 41 times by applause from the audience, including six standing ovations.

Park started her address describing the accomplishments of the Korea-U.S. alliance over the past six decades. She also made an appeal to Congress to win its support on some delicate issues, including Seoul’s pursuit of wider powers in its peaceful use of nuclear energy.

Park reiterated her determination to end the practice of rewarding North Korea for bad behaviors. Park, then, proposed a three-step vision for the future.

“The first is to lay the groundwork for enduring peace on the Korean Peninsula and over time for reunification,” Park said, reaffirming the policy coordination between Seoul and Washington to counter Pyongyang’s threats including the recent long-range missile launch and its third nuclear test.

“I will remain steadfast in pushing forward a process of trust-building on the Korean Peninsula,” Park said. “I am confident that trust is the path to peace - the path to a Korea that is whole again.”

For the second part of the vision, Park presented her initiative for the Northeast Asian region, also known as “Seoul process.”

“The second leg of our journey extends beyond the Korean Peninsula to all of Northeast Asia where we must build a mechanism of peace and cooperation,” she said, noting that the region has failed to realize its potential due to disputes over history.

“Asia suffers from what I call ‘Asia’s paradox,’ the disconnect between growing economic interdependence on the one hand, and backward political, security cooperation on the other,” Park said. “How we manage this paradox - this will determine the shape of a new order in Asia.”

To this end, Park proposed an initiative for peace and cooperation in Northeast Asia.

“We cannot afford to put off a multilateral dialogue process in Northeast Asia,” she said. “Together, the United States and other Northeast Asian partners could start with softer issues. These include environmental issues and disaster relief. They include nuclear safety and counter-terrorism.

“Trust will be built through this process,” she continued. “And that trust will propel us to expand the horizons of our cooperation.”

Park stressed that the initiative will have its root in the Korea-U.S. alliance, and it could reinforce U.S. President Barack Obama’s strategy of “pivoting” toward the Asia-Pacific.

The initiative was proposed following Park and Obama’s summit on Tuesday at which they agreed to define the Korea-U.S. alliance as the “linchpin” of peace and stability in the Asia-Pacific region.

As the last part of her vision, Park promised wider cooperation between the United States and Korea in the global arena in pursuit of peace and prosperity for the world.

“Together, we will help spread the universal values of freedom, human rights and the rule of law,” she said. “We will march together to take on global challenges - from fighting poverty to tackling climate change and other environmental issues.”

In the address, Park did not hesitate to make appeals to the U.S. Congress to resolve some sensitive pending issues, particularly ongoing negotiations on the civilian nuclear deal through which Seoul seeks wider powers to reprocess nuclear waste.

The Blue House said it was a rare opportunity for a foreign leader to address a joint session of the U.S. Congress, given that Park was on a working visit, not a state visit.

Park was the sixth Korean president to give a speech before Congress. The first was done by President Syngman Rhee in 1945.

In 2011, Lee Myung-bak focused his speech on the Korea-U.S. free trade agreement, and he received robust applause. He received 45 interruptions of applause, including five standing ovations.