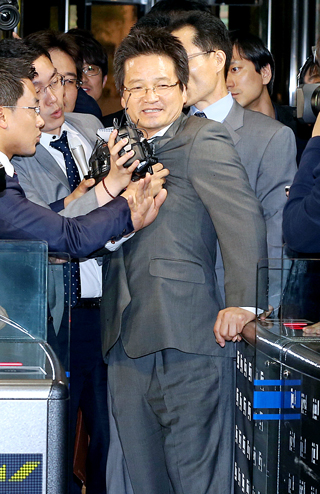 A 51-year-old contractor named Yoon Jung-cheon, who allegedly offered sex bribes to influential people, including high-ranking government officials, at his vacation home in Wonju, Gangwon, was summoned by police yesterday.

Yoon appeared before the headquarters of the NPA in Migeun-dong, central Seoul around 12:25 p.m., about 52 days after the police officially launched an investigation.

Yoon was immediately surrounded by dozens of reporters at the main entrance of the NPA building and denied offering sex bribes to high-ranking government officials.

“I don’t know [about the sex video file],” he said when reporters asked whether he recorded the sex party scene on camera.

Yoon also said that he doesn’t know Kim Hak-eui, the former vice minister of the Ministry of Justice who resigned from the post in March after being implicated in the scandal. Kim has been accused of being one of several high-ranking government officials who attended a sex party at the Wonju villa.

Yoon then headed to the seventh floor of the NPA to be questioned.

Other than Kim, the director of a general hospital and a former executive-level official of the Board of Audit and Inspection are also suspected of taking bribes from Yoon.

The police are considering filing a warrant to detain Yoon for further investigation and running a cross examination with others involved in the case.