Go on a safari, without leaving the city

Go on a safari, without leaving the city 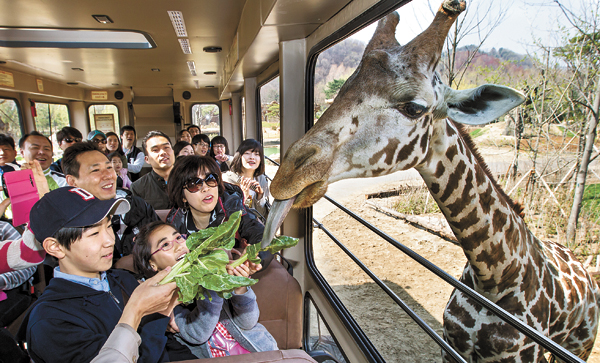 Everland’s new safari, Lost Valley, recently added more animals and amphibious buses. Thanks to the open-air buses, visitors are able to get a close-up, personal look of the animals, such as this giraffe. By Shin Dong-yeon

American author Thomas French wrote in his book “Zoo Story: Life in the Garden of Captives” that “Despite all their flaws, zoos wake us up.”

The balmy air and sweet fragrance of flowers wafting through the air signal that it is the right time to visit zoos.

Of the nation’s many zoos, Everland Zoo and Seoul Zoo are the two most striking.

Everland, the nation’s largest theme park, has it all, from huge gardens dotted with tulips and roses every season to hair-raising attractions to an indoor playground for toddlers. Numerous parades and musicals are staged sporadically, but the zoo is the most popular section for family visitors.

First opened in 1976 under the name of Jayeonnongwon, which means nature farm, Everland, in Yongin, Gyeonggi, introduced Korea’s first and only safari, an exciting and dynamic experience in which people can get close-up, personal looks of wild animals.

At first, the safari only had lions, but it later added other animals, including tigers and bears, and was renamed Safari World. It remains one of the theme park’s most popular destinations because no other Korean zoo offers a safari experience.

What differentiates Lost Valley from Everland’s existing Safari World is its far higher number of animals. But Lost Valley is more eco-friendly because most of the animals, except some wild ones, share the open fields. In one area, cheetahs and rhinos live together, which was quite impressive. Streams, valleys, swamps and rocky hills have also been designed especially for the animals. In contrast, bears, lions and tigers can’t leave their designated living quarters in Safari World. 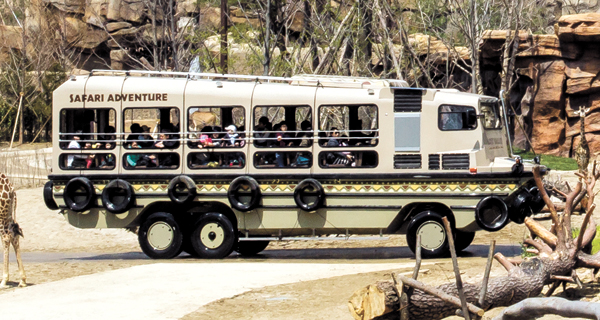 Amphibious buses take visitors around Everland’s Lost Valley. Visitors must keep their distance from the wild animals but can get very close to the herbivores.

In order not to disturb the animals of Lost Valley while they’re in their habitat, the zoo introduced amphibious bus tours.

The buses, which arrive every 10 minutes, hold up to 40 people and have no glass windows, so visitors must keep their distance from the wild animals, but they can get to within a stone’s throw of the herbivores.

Unfortunately, the tours only take 12 minutes, but the theme park plans to launch an hour-long safari tour later this year.

Also, because Lost Valley recently opened, waiting time to enter can be as long as three or four hours on weekends. Smartphone users are encouraged to download the theme park’s application and check out the expected waiting time on a real-time basis.

However, even if Lost Valley is too crowded, visitors won’t be disappointed. Safari World has fewer animals, but it’s still possible to get a close-up look at them from the buses.

A special tour is available at Safari World for 150,000 won ($136). Instead of a regular bus, a six-seat jeep will take visitors around the safari. Visitors can get a 20,000 won discount if they book the special tour via the Web site in advance.

One-day ticket holders can visit Safari World and Lost Valley without additional charges. The price is 40,000 won for adults, 34,000 won for teenagers and 31,000 won for children. 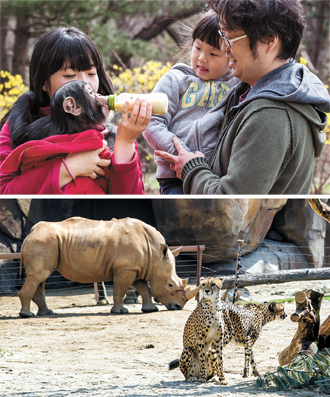 From top: Seoul Zoo is Korea’s largest zoo in terms of area and animal population. The city-run zoo covers 2.4 million square meters (593 acres) and has 2,691 animals from 339 species, including rare animals such as lowland gorillas and lesser pandas: Everland’s Lost Valley covers 41,000 square meters of meadow and is home to 150 animals from 20 species, including zebras, flamingos and giraffes. Cheetahs and rhinos live together on the open fields.

Meanwhile, Seoul Zoo, run by the Seoul Metropolitan Government, is the largest zoo in Korea, at 2.4 million square meters (593 acres.) The zoo’s animal population is 2,691 animals from 339 species, including rare animals such as lowland gorillas and lesser pandas.

For this reason, Son Gwang-su, 39, and Kim So-hyun, 39, drove about an hour from Gyeonggi’s Yongin to Gwacheon, where the zoo is located, with their 4-year-old daughter, Ye-ryeong. “There is not such an inexpensive and productive playground for curious toddlers,” said Son.

Seoul Zoo is nestled next to Seoul Land, a theme park, and the National Museum of Contemporary Art, Korea. The entire complex is called Seoul Grand Park.

The original location of Seoul Zoo was within Changgyeong Palace, Jongno, central Seoul, and it was called Changgyeongwon. It was the country’s first zoo. But the zoo was relocated to its current site in 1984 after the palace was renovated.

Despite its large scale, the admission price is low because it’s run by the Seoul Metropolitan Government. Ticket prices are 3,000 won for adults, and children who are younger than 5 are free. The zoo is also more accessible than Everland. Visitors can get off at Grand Park station, line No. 4.

The admission price is about the same as a take-out coffee, but the zoo’s programs are productive and diverse. This year, about 30 education programs are being offered.

For instance, zookeepers give lectures on the characteristics of flamingos two or three times a day. Children are also able to feed diverse animals from penguins to kangaroos to eagles to elephants every day.

Another noteworthy characteristic of the Seoul Zoo is its attempt to transform into an ecologically friendly habitat, an effort that began in 2003.

Its projects include adding a two-story deck for giraffes so that they could eat more naturally. By doing so, the zoo hopes to provide its animals a much-needed taste of wilderness.

For wild animals such as the lowland gorillas that fear making eye contact with people, glass cages are covered with larger-than-life-size stickers which resemble the rain forest with a sign reading, “Peep inside quietly, please.”

The Seoul Zoo also decided to free Jedol, a bottlenose dolphin, into the sea near Jeju Island next month, although the dolphin leaves the zoo today.

The decision came after Seoul Mayor Park Won-soon accepted claims made by some civic and animal rights groups that Jedol was illegally captured and sold to the city-run zoo.

After scrapping its dolphin shows because of concerns about animal rights, the park now runs 10-minute swimming sessions with the dolphins three times a day, but these feature only lectures detailing the characteristics of the mammals and swimming. All tricks and performances have been abolished.

If you visit the zoo’s Web site, details about all the programs are available. For more information, visit grandpark.seoul.go.kr/main.do or call (02) 500-7338.

The zoo is open until 7 p.m., but animals all go inside their indoor living quarters at 6 p.m. by the end of October.