Toyota and yen allies anew, but world has changed

Toyota and yen allies anew, but world has changed 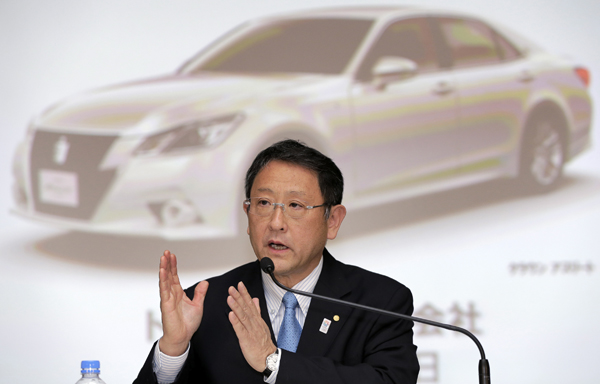 Toyota Motor President Akio Toyoda speaks during a news conference Wednesday at the automaker’s headquarters in Tokyo. Toyota’s January-March profit more than doubled to 313.9 billion yen (3.2 billion dollar) as cost cuts and better sales worked with a weak yen to add momentum to the automaker’s comeback.[AP/NEWSIS]

Toyota Motor’s half-decade of fighting the yen is over, at least for now.

The weakening yen breached 100 against the dollar in U.S. trading yesterday, paving the way for Japan to emerge from an unprecedented and largely uninterrupted five-year stretch where the currency’s appreciation beyond that level roiled exporters and their ability to sell cars and televisions overseas.

The yen last traded at 100 four years ago. While its return to that level may usher in an era in which Toyota and Japan’s other carmakers are no longer shackled by the currency, they face tougher competition than five years ago. U.S. automakers have enjoyed a renaissance, Germany’s Volkswagen is gunning for industry leadership and Korea’s Hyundai Motor no longer is a builder of cheap, utilitarian cars.

“Japanese automakers used to enjoy great advantages over Korean, U.S. and even German carmakers in many markets, but the rivals have been catching up quickly and the gap is at a minimum now,” said Yuuki Sakurai, president of Fukoku Capital Management, which oversees about 1.5 trillion yen ($15 billion). “It’s really not going to be that simple this time.”

One hundred is not a magic number and, by historical standards, the yen remains strong. Still, 100 is an important technical marker because it represents a so-called 50 percent Fibonacci retracement between its high of 75.35 in 2011 and a decade low of 124.14 in 2007.

It’s also powerfully symbolic, and investors have bought into Japan’s recovery, driving the Nikkei 225 Stock Average to its highest level since 2008. Toyota City-based Toyota, the nation’s biggest company, has added almost $100 billion in market value since the yen began sliding in mid-November, when Prime Minister Shinzo Abe, then running for office, began his campaign to weaken the yen and end 15 years of deflation.

Mazda Motor has tripled in value, while Toyota has increased 95 percent.

U.S. automakers have accused the Japanese government of manipulating its currency to gain a competitive advantage.

The weaker yen is giving Toyota, the world’s biggest carmaker, the ability to project its highest annual profit since the record 1.72 trillion yen earned five years ago.

Morgan Stanley estimates the currency boost at $1,500 per car for Toyota. Japanese automakers will probably use the weaker yen to add better components or accessories - rather than cut prices - to win back customers from GM, Ford and Hyundai, said Edwin Merner, president of Atlantis Investment Research Corp., which manages about $3 billion in assets.

“You can use better materials to make the car a little bit better,” said Merner. “You don’t want to cut prices. If you cut the price, it’s hard to raise it.”

For Toyota President Akio Toyoda, 57, currency relief couldn’t come soon enough after battling the yen - exacerbated by recalls and natural disasters - since the day he took over in 2009. In late 2011, he was so glum he warned Japanese automakers may collapse under the weight of a currency that had surged to a postwar high of 75.35 against the dollar.

“We want to think of business not simply for the year ahead, we want to think on a longer time frame, and think about production and business that’s free of currency risks,” Toyoda said on April 10.

Japanese corporate leaders have been waiting for the yen to reach 100. That’s the level Honda Motor President Takanobu Ito said the company could “balance our business,” while Nissan CEO Carlos Ghosn called it “neutral territory.”

When the yen was weaker than 100 five years ago, Toyota was earning almost triple Volkswagen’s net income and almost nine times Seoul-based Hyundai. In Detroit, GM was on its way to losing $80 billion over a four-year stretch as the biggest U.S. carmaker and Chrysler Group LLC headed toward bankruptcies that would cost U.S. taxpayers $80 billion. Ford managed to survive without bailout funds by borrowing more than $23 billion to finance restructuring.

Then the subprime-mortgage crisis hit and the yen never reached 100 again, except for a one-week period in 2009, when the Japanese currency fluctuated between 100 and 101.

The global recession that ensued hit export-driven Japanese manufacturers particularly hard because the stronger yen made shipments to the United States, Europe and Asia more expensive.

Toyota also coped with the recall of more than 10 million vehicles from 2009 to 2010 because of loose floor mats and sticky accelerator pedals. Though probes by the National Highway Traffic Safety Administration and NASA found no flaws in the electronics of Toyota cars, as claimed by plaintiffs’ lawyers, the recalls accelerated Toyota’s decline in quality scores. The company had to wait until 2012 to return to precrisis levels of quality, based on assessments from J.D. Power & Associates, Consumer Reports and ALG Inc.

U.S. automakers used that window to reduce labor costs and invest in building cars that rival Japanese quality across all lines. This year, with their most competitive lineup from top to bottom in a generation, GM, Ford and Chrysler all gained market share in the first quarter for the first time in 20 years and exceeded analysts’ sales estimates last month, leading the industry to its best April since 2007.

The misfortunes of Japan’s auto industry coincided with the rise of Seoul-based Hyundai and affiliate Kia Motors, which saw their combined share of the global auto market surge to 8.8 percent last year from 5.5 percent in 2007, gaining more than any automotive group during that period, according to data compiled by Bloomberg Industries.

Led by Chairman Chung Mong Koo, 75, the Korean automakers used the opportunity to expand capacity from Georgia to Beijing and improve the quality of their vehicles to the point that in January 2012, Hyundai’s Elantra was crowned North American Car of the Year by Detroit automotive journalists. The outlook is not as bright this year, with analysts projecting Hyundai’s slowest profit growth in five years as the won appreciates.

In Germany, Wolfsburg-based Volkswagen set out six years ago to become the world’s biggest carmaker and a leader in profitability by 2018. Based on operating income, it reached the latter goal last year by earning a record 11.5 billion euros ($15 billion), trumping GM and Toyota.

Japanese automakers sought to cope with the appreciating yen by shifting production overseas. Japan’s seven biggest carmakers will produce 34 percent of their vehicles domestically this year, compared with 49 percent in 2007, according to IHS Automotive estimates. They’ve also cut other manufacturing costs, making them ripe for a profit bonanza as the yen weakens, said Masatoshi Nishimoto, a Tokyo-based analyst with IHS in Tokyo.

“Their products have more of a competitive edge compared with five years ago,” he said. “The weaker yen is going to improve their profitability, but not necessarily their sales. If you look at the European market, the situation remains severe. The North American market is also getting tougher and so are emerging markets, where the competition is intensifying.”