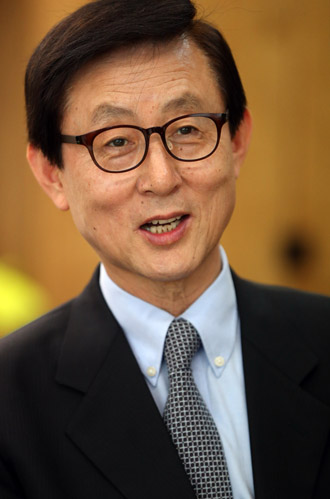 Better World, a nongovernmental organization led by 65-year-old Kim Kwang-dong, is different from other relief groups.

As part of its work, it selects a village with a population of 3,000 to 10,000 people and transforms the entire community into a “Better Village.”

Last year, the organization built a town hall combined with a learning center, which has a solar-powered air-conditioning facility, in a village in Pakistan. The construction of a waterway, which connects a river and the village, is also in full swing.

In addition, it brought two young people from the village to Korea and has been teaching mechanics and sewing.

Better World has also turned its attention to Rwanda. After selecting a village, it plans to build a poultry farm and invite two young adults to Korea to teach them about poultry farming and the spirit of the Saemaeul Movement, which helped people get out of chronic poverty and develop rural areas in the 1970s in Korea.

“The most important task is to get rid of the sense of failure that comes from the poverty. People in Rwanda, which was a colony of Belgium for a long time, still purchase expensive imported frozen chicken from Belgium, although they could raise their own chicken. We are trying to let them realize that they can also produce chicken and teach the methods,” Kim said. “You cannot eradicate poverty just by providing food assistance to end the hunger for now. You have to create a source of living.”

Kim has served as a diplomat for the past 35 years. He was an ambassador to Brazil and the first diplomatic minister of the OECD.

Since his retirement in 2007, Kim has decided to live for others as he has lived for his country and his family until then.

Kim established Better World in December 2010. Starting with on-site volunteer work in the aftermath of the March 2011 earthquake and tsunami in Japan, the NGO went to other disaster areas such as Thailand and Turkey.

Since last year, it has been helping in the southwestern region of Africa, the poorest region in the world. On Wednesday, it held a charity concert to help children in Africa with violinist Jung Kyung-hwa at the Seoul Arts Center.

Although Kim has lived a prosperous life as a diplomat, he said the difficult times of the past three years have been the happiest of his life.

He spent more than 10 days every month in remote areas, most of those more than 40 hours away by plane.

“Fatigue and pain goes away after seeing children in Guinea Bissau smiling at a soccer ball I bring to them,” said Kim.

Kim is now constructing a medical center in Guinea Bissau. The child mortality rate of those under the age of 5 stands at 25 to 30 percent in the region.

It is impossible to store medications as there is no electricity, so Kim decided to build a solar facility and a water tower after securing drinking water by digging 50 to 100 meters (328 feet) underground.