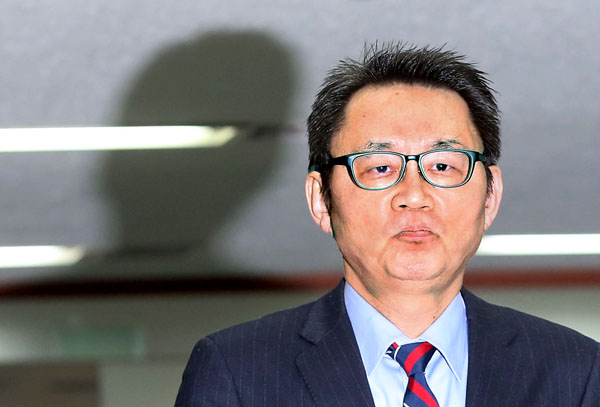 Yoon Chang-jung, fired as Blue House spokesman yesterday after a sexual assault complaint in the U.S., in a file photo from last December. By Kim Hyung-soo

President Park Geun-hye fired spokesman Yoon Chang-jung in the middle of her trip to the United States after he was accused of sexually assaulting an intern from the Korean Embassy in Washington.

The scandal marred an otherwise highly successful premiere trip abroad and directly embarrassed Korea’s first woman president, who vowed to crack down on sex crimes during her presidential campaign.

Yoon cut his trip short and flew quickly back to Korea from Washington, apparently before he could be arrested by Washington police.

Lee Nam-ki, presidential secretary for public relations, held a media briefing Thursday in Los Angeles and announced Park’s decision to sack her spokesman. Yoon had disappeared Wednesday, a day after the president’s summit with U.S. President Barack Obama and the day she spoke before a joint session of the U.S. Congress.

“President Park decided Thursday to replace her spokesman Yoon for engaging in an unsavory act and disgracing the country over his personal involvement in an inappropriate incident while accompanying her on the presidential trip to the United States,” Lee said Thursday. “We are trying to get an accurate account from the Korean Embassy in the United States and will announce the details in a transparent fashion as soon as they are confirmed.”

Lee did not describe Yoon’s “unsavory act,” but an allegation of a sexual assault quickly spread on a popular Internet site of Korean residents living in the United States. The posting said the alleged victim was a 21-year-old Korean-American female intern at the Korean Embassy.

The alleged victim was an intern recruited by the embassy to assist the presidential delegation and the press during Park’s stay in Washington, according to the Korean Embassy, and she was assigned to assist Yoon in particular.

The Metropolitan Police Department of Washington confirmed Thursday it received a complaint against a Korean civil servant over an alleged sexual assault but refused to disclose the details, saying the case was still open.

The report said the suspect “grabbed [the victim’s] buttocks without her permission” in a hotel.

The address of the incident in the report was the W Hotel, less than 10 minutes by car from the Fairfax Hotel, where Yoon and the Korean press stayed. The alleged incident took place between 9:30 p.m. and 10 p.m. Tuesday, the report said.

Sources at the Korean Embassy and other interns told the JoongAng Ilbo that Yoon invited the intern to his room at the Fairfax Hotel early the next morning. He was wearing only underwear at the time.

The intern made a complaint to the Washington police the following day by phone.

After wrapping up her three-day stay in the U.S. capital, Park, her entourage and the presidential press corps moved to Los Angeles, the final leg of her trip, on Wednesday afternoon, hours after she gave her speech before Congress. Yoon was conspicuously missing from the presidential plane and speculations grew about his whereabouts.

According to sources, Yoon gave his version of the incident to Presidential Civil Affairs Senior Secretary Kwak Sang-do in a telephone conversation after he landed in Korea.

The media was unable to contact Yoon. “Kwak was given the initial account of the incident through the telephone conversation, but it will take a long time to actually find out what happened,” a Blue House official told the JoongAng Ilbo. “Because there is an alleged victim, we cannot say anything until we listen to what she has to say.”

Yoon was handpicked by Park shortly after her presidential victory. The scandal surrounding him put a damper on the administration’s efforts to describe Park’s U.S. trip as a total success.

“The presidential trip was praised highly for its successful outcome, and we were also very satisfied with it, but there was one regrettable incident,” Lee, senior public relations secretary, said when he announced Yoon’s dismissal.

Yoon, a 56-year-old former journalist and columnist, had a high-profile political debut when Park chose him as her spokesman last Dec. 24, five days after her presidential victory. He served as a spokesman of the presidential transition team and was formally appointed one of two Blue House spokespeople after Park’s inauguration.

During his 136 days working for Park, however, he faced numerous complaints from the press for his inability to communicate. While serving as a spokesman for the transition committee, he called himself “the exclusive reporter,” refusing to share information with the press.

Opposition parties criticized him for cruel comments about liberal politicians in his past columns. In one of his commentaries, Yoon called supporters of Park’s presidential rival Moon Jae-in “political prostitutes.”

The Democratic Party yesterday condemned Yoon and demanded President Park to apologize for the incident.

“Park and the Blue House must repent for the disgracing of the country caused by their wrongful appointment and issue a public apology,” said Representative Bae Jae-jeung, spokeswoman of the largest opposition party.

A group of 23 women lawmakers of the Democratic Party also held a press conference and condemned Yoon for having returned to Korea in a rush to avoid a U.S. police investigation into his alleged sexual assault. They also criticized the Blue House for trying to cover up the case and demanded an apology.

“After the victim filed a report to the police, Yoon reportedly presented his foreign delegate visa,” the lawmakers’ statement said. “Then the police told him to stay in his hotel for questioning later. While the police were contacting the Korean Embassy to take him into custody, Yoon went straight to the airport without even collecting his personal belongings and ran away.”

“It is a crime that ruined Korea’s reputation by making it an international sexual offender,” their statement said. The lawmakers demanded that the Blue House clearly state the details of its handling of the scandal because there is suspicion that it attempted a coverup.

The lawmakers also said the government must cooperate if the U.S requests Yoon be extradited.

The ruling Saenuri Party was shocked. “If the allegation is true, that is something that can never be tolerated,” said Representative Min Hyun-joo, spokeswoman of the Saenuri Party.