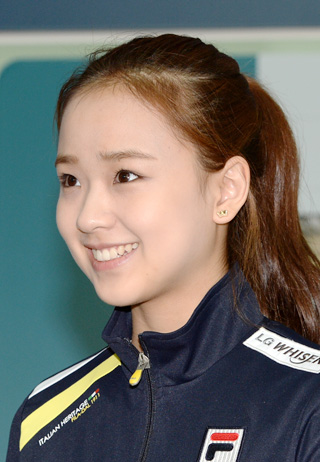 Korean rhythmic gymnast Son Yeon-jae smiles during a press conference at Incheon International Airport yesterday before boarding a flight to Moscow. She will seek her fourth straight World Cup medal at the competition that starts Thursday in Belarus. Son, the first Korean Olympic finalist in rhythmic gymnastics, easily won the national rhythmic gymnastics team qualifier Friday in Seoul, earning the right to represent the country in the Asian championships next month and the Summer Universiade in July. The World championships will be held late August.

“I want to perform well in my first Asian championships,” Son told reporters. “As there is sufficient time before the world championships, I will try to get as experienced as I can from various events.” [NEWSIS]