The 63-year-old man surnamed Lee bought a commercial property inside an apartment complex in Heukseok-dong, southern Seoul, four years ago. He leased out the space for 100 million won ($90,407) deposit and monthly rent of 3 million won. The first renter ran snack bars but left after two years as his business was not doing well.

Lee, who couldn’t find another tenant for more than three months, lowered the monthly rent to 2.7 million won and eventually found a renter who opened a pizza delivery shop. But after two years, he, too, is leaving.

“Renters change and there was a vacancy for five months, so annual return on investment [ROI] has been about 4 percent, which is lower than my original expectation of 6 percent,” Lee said.

But at the same apartment complex, 45-year-old Wi has had a different experience. Just like Lee, Wi also leased out space with a 100 million won deposit and monthly rent of 3 million won after buying a store four years ago. But his renter has stayed, running a convenient store.

“As the renter stays for a long time, there are not many things for me to worry about,” Wi said. “Even after paying my loans, I still get about 1.5 million won per month, and my return on investment is 6.5 percent.”

The cases of Lee and Wi show that even if they are in same location, the rate of return on commercial space can differ. According to FR Investment, a commercial building information provider, the ROI difference could reach 30 percent depending on the business. 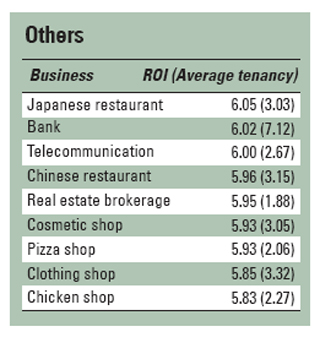 According to FR Investment, which investigated the ROI rate of 3,000 stores in the Seoul metropolitan area, commercial space owners maximize their ROI when tenants stay put.

Banks and pharmacies stayed an average of 85 months and 75 months, respectively. Other long-term businesses were clinics and medical offices (56 months), convenience stores (52 months) and optical shops (48 months). Annual ROI rates from these businesses were more than 6 percent.

“Banks, medical businesses and pharmacies are expensive to set up, so tend to operate for a long time,” said Bae Sung-ho, a director at MI Consulting, which specializes in medical start-ups. “Those businesses also take long time to get establish a regular customer base.”

In contrast, renters who run delivery-based or takeout businesses like as chicken (26 months) and pizza (24 months) shops, and real estate brokers (20 months) stayed for a short time. The ROI rates from these businesses were in the 5 percent range, but industry insiders said vacancies and related costs would drop the ROI rate by as much as 2 percent.

Experts point out that chicken and pizza shops have low setup costs, meaning they are more likely to move. In addition, the retirement of baby boomers has led to many rookie business start-ups recently, which also increased the risk of failures.

“Businesses that have low entrance barriers have not only a risk of business failure, but also a lower ROI rate for the builder of owner who leased the space,” said Kwon Kang-soo of Korea Establishment Realty. “The key point of commercial building investment is to find renters who can stay a long time.”

Frequent moves increase the vacancy rate. To retain tenants, a lessor may need to lower or maintain the rent. However, FR Investment says this is also difficult as rent goes up following inflation rate.

“These businesses prefer high floors or underground, which has low rent,” said Ahn Min-seok of FR Investment. “But as renters change often, vacancy rates could be high and real ROI could be lower.”

Experts emphasize it is critical for lessors to attract high-return renters in the first place because interiors or facilities will lead to other renters who run similar businesses.

“If a renter wants to open PC room in a space that was previously used as restaurant, existing facilities need to be torn down and that costs money,” said Park Dae-won from the Shopping Area Information Research Center. “From renters’ point of view, they look for a shop that has had similar businesses.”

To secure long-term rental periods from businesses, lessors also need to consider the location and type of commercial buildings. For instance, hospitals or banks prefer second-floor space because of cheaper rent, but convenience stores and fashion shops want the first floor. As for commercial space inside apartment complexes, laundry shops, barber shops and real estate agencies are preferred, while bakeries, coffee chains and hagwon are better near small building neighborhoods.