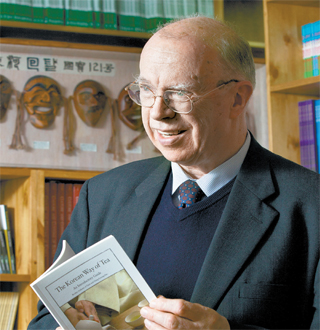 Koreans have generally long believed themselves to be of “one blood.”

But recent historical discoveries have revealed otherwise, showing that Korea owes some gratitude to foreigners as well.

For instance, there is historical evidence that people from the Middle East lived in the kingdom during the Unified Silla Period (676-935); an Indian princess came to Gaya (the confederacy of territories in southern Korea between the first and sixth centuries) to marry a king; and a fallen Vietnamese royal family came to Goryeo (918-1392) and settled as progenitors of the Hwasan Lee clan.

Now, there is a community of foreigners that has played a pivotal role in shaping Korean history since 1900.

It is the Royal Asiatic Society Korea Branch, and although the community has no link to the royal family of the U.K., its members include some of the most well-known foreign missionaries in Korea that established modern schools, hospitals and churches in the early 20th century.

Among them are Horace Grand Underwood, Henry Gerhard Appenzeller, Horace N. Allen and Homer B. Hulbert. Many Koreans know Hulbert as the adviser to King Gojong who helped fight off Japanese encroachment.

The 113-year-old community is facing both a challenge and a new opportunity nowadays.

With the introduction of the Internet, few are resorting to the community to learn about Korea and its culture. There is a vast amount of information on the Internet.

The community’s key programs include cultural excursions, as seen in the 1993 tour to Gangneung, Gangwon and lectures, as seen in the 2011 talk by Kim Dong-jin. By Park Sang-moon, Provided by the association

But on the other hand, there is also increased interest about Korea across the globe, and more people are taking on the country as the subject of study. Although the community also goes on tours and excursions, its key works are lectures and annual academic journals.

The Korea JoongAng Daily recently sat down with the community’s president, Brother Anthony, who goes by the similarly sounding Korean name An Sonjae. An is an emeritus professor at Sogang Unversity and chair professor at Dankook University

An came to Korea in 1980 and is known to Koreans as a translator of numerous literary works by some of the country’s most influential writers and poets like Ko Un. His work has won several translation awards, and he has been recognized by the Korean government with the Okgwan Order of Culture Merit.

Q. Looking back at the community’s history, what would you say is its biggest achievement?

A. We were the first organization for Korean studies in the world, and Transactions is the first academic journal devoted to Korean studies. We have published now the 86th volume as at the start it was a bit rocky and also it stopped during wartime when all foreigners were expelled.

So we started Korean studies at a time when outside Korea nobody was interested in Korea, nobody knew about Korea. We have always been the organization in Korea where foreigners - and Koreans too - come to learn about or talk about Korea in English.

We also have books, including books by our members, and a library and a bookstore. From the 1970s, some of our members started publishing books on Korea - very serious books. So we began to publish the books then. I think we published about 30 books in about 30 years. We also have some very old, rare books.

Now the books don’t represent much, but until about 1995 - when the Internet came - this was the only place in Korea where you could buy books in English about Korea. In the old days - the ’70s and ’80s - Korea was challenging for foreigners, difficult to get around. Nobody spoke English, there were no guidebooks for foreigners. So in those days, all the foreigners joined because there was very little to do. I’d say there was not much competition then.

What are the community’s latest concerns and what is it doing to overcome them?

Today, we have a whole new generation even in the last 10 years. Very few people who are here now were here 10 years ago. So we have to keep finding new members. This is the biggest challenge for us. How do people now arriving in Seoul discover us? It’s because there’s so much else to do - clubbing in Hongdae, shopping in Gangnam, buying guidebooks like Lonely Planet and from Seoul Selection. The guidebooks tell you everything.

The best thing we do at the moment is our lectures. About 10 to 15 years ago, very few people came to the lectures. But as we are trying to make them as varied, interesting and worth attending as possible, it’s changed. Like recently, Andrei Lankov, a Russian expert on North Korea, gave a lecture and at least 120 people came. So we try to get interesting talks - people who are good and whose topics will interest a lot of people.

Also, for the first time, we have the first stockpile, inventory of all our books - about 3,000 volumes. Before it was all very amateur, but now we will promote our library more because many of our books are very old and rare. It’s more of a research library, though. Many of the books are completely out of print. They are something you can’t get on Amazon. We are also in the process of setting up an e-book library on our home page. We have digitalized the books in our library in addition to the 350 books from the library of former British ambassadors.

Do you actually feel the increased interest around the world in Korean studies?

Yes. So what we are hoping is to deepen this Korean studies side. What you have in Korea now is Sungkyunkwan, Sogang, Yonsei and a series of universities where people are studying, teaching and learning Korean studies in English. So they are offering Korean studies - not just for summer programs, but right through the year - at the undergraduate level and graduate level. You have quite well-known scholars coming to teach, even full-time.

So this is something new - professional Korean studies people teaching in English, who are resident in Korea, not just passing through. We think maybe with them we should try to set up something academic - some kind of workshops and seminars. That’s what we are working on right now, trying to find a new set of activities that could appeal to professional Korean studies people.

Interest in Korea has increased enormously, mostly because of Hallyu. A lot of young people in Europe have suddenly found an interesting image of Korea. Before they didn’t know Korea, but now Korea is something new and interesting to them. So people who are teaching Korean studies overseas say they see far more people whereas before it was just Chinese and Japanese.

It’s very easy to have a good time in Korea. So our role remains. Our role is always to provide something deeper and a place for people who want to understand Korea more in-depth. We can’t always provide very fun programs, but our programs are very rewarding for those who have the curiosity. I think the curiosity is always the most important thing.

The Royal Asiatic Society Korea Branch, which has about 650 members - 70 percent of whom are foreigners - holds lectures twice a month in addition to weekend excursions. More information can be found at www.raskb.com or on Facebook at www.facebook.com/RASKB.