President Park Geun-hye’s chief of staff yesterday issued a public apology for the disgraceful sexual assault scandal involving a Blue House spokesman, but it did little to calm the boiling controversy surrounding the Blue House’s alleged attempt to hush up the incident.

Park fired her spokesman, Yoon Chang-jung, in the middle of her trip last week after he was accused of sexually assaulting a young female intern from the Korean Embassy in Washington. Yoon cut his trip short and flew quickly back to Korea, although the case was left open by the Washington police.

“Despite the successful outcome of the trip, a presidential staffer was involved in a disgraceful incident,” said Huh Tae-yeol, presidential chief of staff, in a news conference at the Blue House yesterday. “The nation is seriously upset by the incident, and no words, even if I had 10 mouths, can fully express my apology. Words will not be able to describe how sorry I am for this wrongful incident.”

Huh also issued an apology to the victim and her family as well as the Korean community in the United States. “Although Yoon was fired immediately, we will take every necessary action in the future,” Huh said. “We won’t conceal, defend or delay anything.”

Huh also said Lee Nam-ki, senior presidential secretary for public relations and Yoon’s immediate supervisor, already tendered his resignation to assume responsibility over his staff’s disgraceful conduct. “If anyone should be held accountable, including me, we won’t avoid it,” Huh said. Asked after the press conference if Lee’s resignation was accepted, Huh said that’s up to the president to decide. 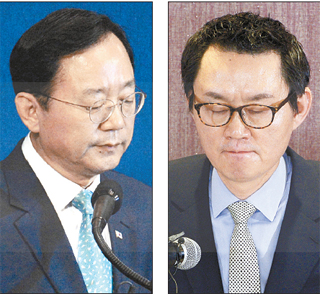 The presidential chief of staff’s statement, particularly the pledge to hide nothing, appeared to be in response to the growing mystery over who arranged for Yoon to flee the United States amidst the police probe.

While the Blue House initially said it had nothing to do with Yoon’s return, Yoon said he was ordered to return home.

In a press conference on Saturday, Yoon denied the sexual assault charge. Giving a lengthy detail of what had happened in Washington, Yoon said he just patted the intern’s waist to cheer her up while having a drink, calling the incident a “cultural misunderstanding.”

According to the initial incident report by the Washington police, the victim said Yoon “grabbed her buttocks without her permission.”

Throughout his explanation, Yoon also tried to diminish the intern by calling her a “guide,” although the victim was a volunteer, formally recruited by the Korean Cultural Center of the embassy in Washington, to assist Park’s delegation and press. About two dozen were recruited as interns for last week’s event, the Blue House said.

Yoon also claimed that Lee, his immediate supervisor, ordered him to return to Korea. “Lee told me that I ran into an unlucky situation and I should leave Washington quickly and return to Korea because no excuse will be accepted for a sexual assault,” Yoon said. He also said he wanted to stay in the United States and explain his position, but Lee told him that he had already booked a plane ticket and forced him to leave.

It was confirmed that Yoon used his own credit card to purchase a business-class ticket on a Korean Air flight from the counter at Dulles International Airport in Washington Wednesday afternoon, but no information on who made the reservation was verified.

Following Yoon’s press conference, Lee met with media Saturday evening and denied Yoon’s claim that Lee had ordered Yoon to leave. While criticism rose over the Blue House’s handling of the situation, the Blue House made it clear yesterday that it has no intention to further investigate the presidential aide’s alleged involvement in arranging for Yoon to flee.

The office of the presidential civil affairs secretary already questioned Yoon and Lee separately about the incident, including Yoon’s controversial return, but said there won’t be any further probe.

“I am not sure about the accuracy of the account of what happened,” Kwak Sang-do, senior civil affairs secretary, said yesterday after Huh’s press conference.

“But legally speaking, ordering the return is not against the law. Even if that was true, there is no reason for us to look into it, unless it involved a legal violation.”

“We made an inquiry with the Ministry of Justice and a U.S. attorney, and they said it’s not against U.S. law,” Kwak continued.

“If you use your common sense, anyone sensible will think whether or not it is desirable for that kind of a person to remain near the president,” Kwak continued, apparently defending Yoon’s return, whether or not it was arranged by the Blue House.

While trying to redirect the public attention from Yoon’s controversial return, the Blue House yesterday made clear that it will do its best to assist the U.S. authority to investigate the former spokesman’s sexual assault charge.

“If we receive an extradition request, we will fully cooperate,” Kwak said, adding that the U.S. authority will normally take a week or 10 days for further action.

He also said the U.S. government already asked Korea to protect the victim’s identity and not to contact her, since she is a U.S. citizen.

Kim Haing, presidential spokeswoman, said yesterday the priority is laying bare the truth on the sexual assault allegation as soon as possible.

“We will ask the United States to proceed with the investigation quickly, and the Blue House will fully cooperate,” Kim said. “We also believe Yoon will cooperate, too.”

Despite the Blue House’s frantic attempts to calm the situation, the ruling and opposition parties further raised their voices, demanding higher officials to take responsibility for the international disgrace and the subsequent poor handling of it.

Based on the accounts of the Blue House officials, it took 36 hours for the presidential staffers to report to Park and fire Yoon after first becoming aware of the alleged sexual assault.

According to Lee, he was first notified about the incident Wednesday morning, shortly before Park’s speech before Congress. The senior secretary, however, told his aide to handle the situation, rather than taking the matter into his own hands.

The Blue House also failed to control the situation, even after the president and her entourage came back to Seoul on Friday. Lee issued a short apology, composed of a mere four sentences, fueling the public rage. In the statement, Lee apologized to Park for troubling her with the unsavory incident, inviting furor from the public, especially the opposition Democratic Party, which demanded the president issue an apology to the nation rather than receiving one.

Yoon also went ahead and held a press conference on Saturday, denying the sexual assault charge and blaming the Blue House for throwing him under the bus, but the presidential office waited until yesterday for Huh to hold an official media event to address the situation.

A Blue House source told the JoongAng Ilbo that Yoon had admitted to some of the sexual assault charges to the presidential office when he was initially questioned after his arrival. The office of the senior civil affairs secretary presented the victim’s testimony to Yoon, the source said, and Yoon admitted that he had touched her buttocks and that he was also not dressed when the intern knocked on his door the next morning.

The ruling Saenuri Party and the opposition Democratic Party yesterday criticized Yoon in one voice for his “shameless” attitude.

“Yoon must go to the United States and submit to the investigation instead of giving lame excuses,” a group of women lawmakers of the Saenuri Party said in a statement.

Other parties also issued statements, demanding that Yoon go to the United States and cooperate with the probe. The Democratic Party also vowed to hold a National Assembly hearing on the incident that “disgraced the nation’s prestige.” A Saenuri official said the ruling party could find no excuse to reject it because it was an incident that prompted public outrage.