Inter-Korean business at a standstill

Inter-Korean business at a standstill 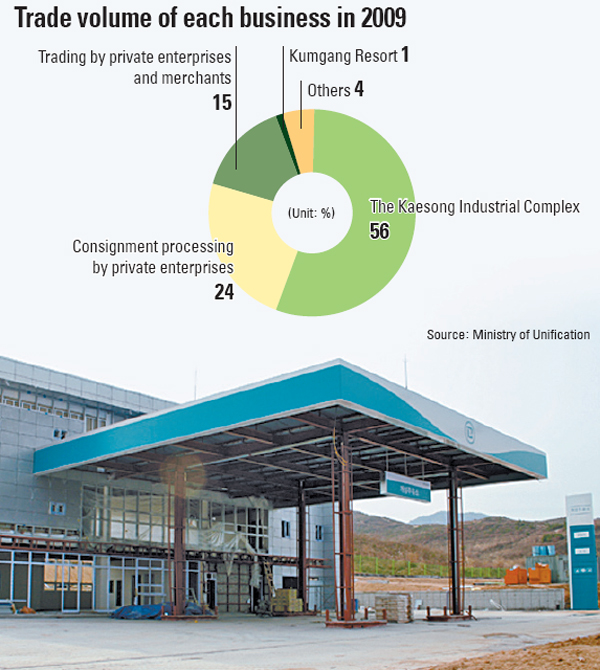 A gas station was nearing completion in Kaesong city, North Korea, on Dec. 18, 2008. The station, built by a South Korean enterprise called Badubatu, was never finished after inter-Korean businesses were halted in 2010. Provided by Badubatu

As the government focuses on how to salvage the closed Kaesong Industrial Complex, some businessmen who invested in North Korea-related projects outside the industrial park are saying they could use some help, too.

“Roughly 1,000 people ran inter-Korean business, including some 40 businessmen who invested large sums of money on the North,” Ryoo Dong-ho, a representative of the coalition, told the Korea JoongAng Daily Wednesday. “The total loss of the investors and the traders is estimated to be about 150 billion won [$136 million].”

Most of the businessmen ran small-sized companies, such as importers of natural resources into the South or running factories outside of the Kaesong complex.

“I built a gas station, and it was almost completed,” Ryoo said. “But due to the May 24, 2010 sanctions [imposed after the sinking of the Cheonan warship], I had to walk away from it. I also purchased some land in the North to build a hotel, which was also halted. 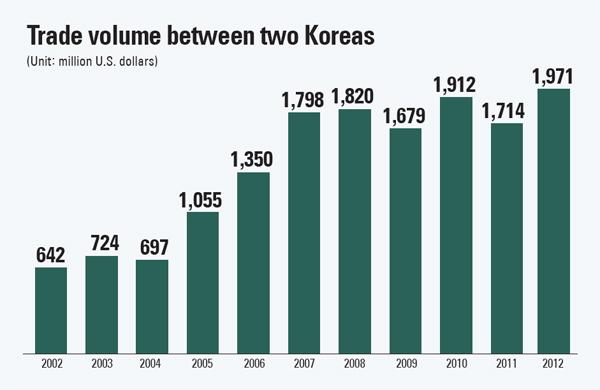 “One businessman brought sand from the North and invested 25 billion won,” he continued. “Some brought stones from North Korea to be used in construction in the South, investing about 20 billion won. Another businessman built a clothing factory in Kaesong city.”

In 2009, according to the Ministry of Unification, business by private investors and traders apart from the Kaesong complex and the Mount Kumgang Resort accounted for about 40 percent of all inter-Korean business. But after the 2010 sanctions, revenues from the Kaesong complex accounted for 99 percent of inter-Korean businesses.

Inter-Korean trade increased from $18.7 million in 1989 to $19.7 billion in 2012, according to statistics by the Unification Ministry.

The early stage of inter-Korean business was trade. Four months after Roh’s declaration, on Nov. 18, 1988, the Daewoo Group, a leading conglomerate in the South at the time, imported a total of 519 North Korean ceramic vases through a Hong Kong broker, getting the first government approval for such a trade.

Inter-Korean business accelerated after the late chairman of Hyundai Group, Chung Ju-yung, crossed the heavily fortified border in 2000 with an array of trucks carrying a herd of cattle to the North, a milestone in inter-Korean history. During his meeting with then-North Korean leader Kim Jong-il, Chung reached an agreement to start the Mount Kumgang Resort and the Kaesong industrial project.

In 2000, Hyundai Asan and North Korea reached an agreement on the Kaesong Industrial Complex; in 2002, the South’s government held a groundbreaking ceremony to build the Gyeongui Line, a railroad linking Seoul and Uiju County, North Korea, and another road across the border; an overland tour to the Mount Kumgang Resort began in 2003; the Kaesong complex released its first products in December 2004.

In 2006, both sides signed an agreement on inter-Korean business in light industry and natural resources development. The South provided a total of $80 million of raw materials for the North, such as textiles, shoes and soaps, to develop its light industries as a loan between July 2007 and March 2008. In return, the North offered a total of 1,005 metric tons of zinc used in automobiles, worth $2.4 million, between December 2012 and January 2008. Pyongyang promised to pay back the rest of the loan from 2014.

But in 2008, a South Korean female tourist was fatally shot by a North Korean soldier at the Kumgang resort. Tours were stopped when Pyongyang refused an explanation or apology and ultimately all the Southern business owners were forced to leave their assets at the resort.

“Apart from Kaesong, the second biggest victims of the halted inter-Korean business were those who invested in the Kumgang resort,” Ryoo said. “One of the businessmen even committed suicide after the shutdown of the resort, and most of them are still struggling.”

After North Korea’s second nuclear weapons test in 2009, a cooperative farm and the natural resources business were also halted.

After the Cheonan was sunk in 2010, which South Korea blamed on the North, the Lee Myung-bak administration imposed so-called “May 24 measures,” which prohibits all inter-Korean relations except humanitarian aid for children and some underprivileged people.

Even with soured relations with Pyongyang, the Kaesong complex kept running. But Pyongyang issued an entry ban on all Southern people and cargo into the complex in early April as part of its saber-rattling against new UN sanctions following its latest nuclear and missile tests. Then it pulled all its workers out.

“We provided special loans twice, a total of 56.9 billion won for 221 companies,” a Unification Ministry official said. “We are mulling additional assistance for the small merchants and businessmen.

“For the future of the two Koreas, boosting private inter-Korean business is good,” Ryoo said. “North Korea has plenty of high-quality natural resources and cheap labor. What we really want is not compensation from the government, but resumption of inter-Korean business. And I think the businessmen in the Kaesong complex are of the same opinion.”