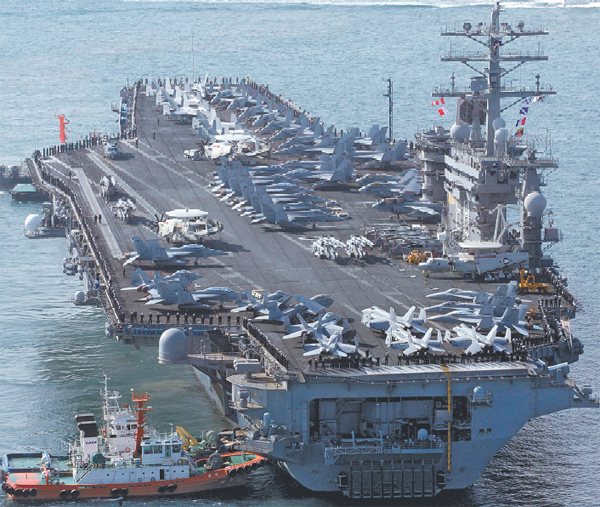 A U.S. naval fleet led by a nuclear-powered aircraft carrier, USS Nimitz, one of the world’s largest warships, arrived in the southern port city Busan on Saturday to take part in a joint drill off the eastern coast of Korea starting today.

After arriving in Busan, the fleet heads to Pohang waters this morning for a two-day drill in the East Sea, a South Korean defense official said yesterday. The 97,000-ton Nimitz will participate in joint search-and-rescue operations as well as “sea maneuvering,” or testing vessel controllability, in the southern and eastern coasts of the Korean Peninsula, the Combined Forces Command announced last week.

The Nimitz is the flagship of the Carrier Strike Group Eleven, which with Carrier Air Wing Eleven will take part in the drill with guided-missile cruisers and destroyers in Korean waters. South Korea will deploy its Aegis-class destroyers for the joint drills.

The Nimitz is 332 meters (1,089 feet) long and 76 meters wide, equivalent to three soccer fields lined up end-to-end. The carrier, powered by two nuclear reactors, is reaching the end of its 50-year lifespan.

“The two countries’ Navies will train for sea maneuvering and detecting missiles by North Korea and enemy submarines in the sea,” a South Korean army official stated yesterday, stating this is part of annual naval drills by Korea and the U.S. following the 2010 Yeonpyeong shelling.

Rear Adm. Michael White, the group’s commander, upon arrival in Busan, emphasized the strengthened bond between the two nations as they celebrate the 60th anniversary of the alliance. The drills, he said, were an opportunity to train with its partners, “not a response to any particular event.”

“We exercise routinely with South Korea, so we continue to hope it shows our alliance to promote peace and prosperity in the region,” said White to reporters, stating the USS Nimitz was “on a scheduled deployment” in the region.

But North Korea slammed the arrival of the aircraft carrier, stating it was a “grave military provocation.”

The North’s Committee for the Peaceful Reunification of the Fatherland in a statement late Saturday said the military actions of the U.S. and South Korea’s “enemy forces” have raised “the risk of a nuclear war on the peninsula.”