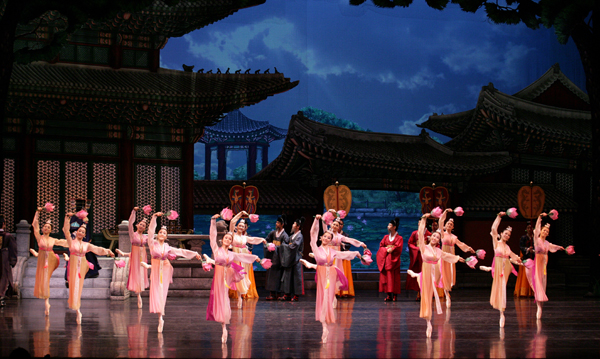 A scene in “Sim Chung” takes place on palace grounds. Provided by the organizer

Some of the most powerful Korean tales failed to make it big on stage.

Case in point is the story of a Korean queen being assassinated by the Japanese in her very own palace. Although the musical “Last Empress” fared well, its movie version was a disappointment for both critics and the public.

The same goes for the story of Ahn Jung-geun, a Korean independence fighter. The musical “Hero,” which tells his story, is mediocre at best.

But the touching tale of Sim Chung, a faithful daughter with a blind father, seems to be the exception.

Sim Chung volunteers to be a human sacrifice for the boat people in order to support her poor family. But moved by her story, the Sea Dragon King allows the girl to be returned to the land. She somehow ends up within the grounds of a Korean palace and wins favor with the king.

The king then throws a festival for blind people from across the peninsula to help Sim Chung find her father. Once the daughter and father reunite, he is overwhelmed with joy and magically regains his sight.

The ballet production of the Korean tale was first performed in 1986 by Universal Ballet and has moved abroad under the title “Sim Chung: A Legend from the Far East.”

Before watching the show, it was hard to imagine people dancing ballet in bulky hanbok, traditional Korean attire that usually covers the majority of the body with a balloon-like silhouette. But somehow, the production made it work quite gracefully.

For starters, there were Korean dance moves such as the movement of the feet kicking inward, arms swaying sideways and occasional hands touching the ground.

When the court dancers perform a traditional mask dance later on, it becomes even more evident that the performance incorporates a good number of Korean dance moves.

The backdrop, which has a two-story structure, is also quite nice. It certainly reminds viewers that not all Korean traditional buildings were single-story structures.

And finally there is the scene where the king and Sim Chung throw a feast for the blind on the palace grounds. It evokes a famous painting of the party King Jeongjo threw on 1795 for the elderly.

Although the opening scene, which takes place in Sim Chung’s house, and the final scene at the palace are certainly Korean in terms of backdrop and atmosphere, the two middle sections - the boat scene and the underwater scene - are quite universal.

This probably helps in the performance’s appeal to international audiences.