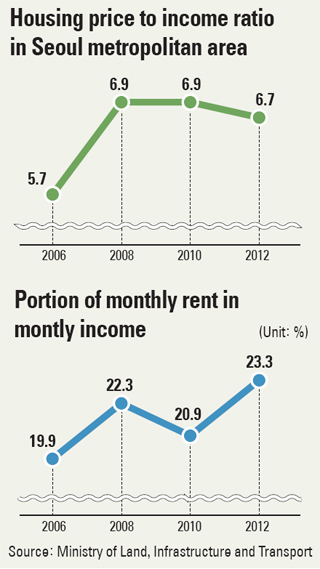 Koreans shouldn’t spend their annual incomes on anything else for 6.7 years if they want to buy a house in the Seoul metropolitan area. Not surprisingly, fewer people plan to buy homes than before, according to a report yesterday by the Ministry of Land, Infrastructure and Transport.

Since Kim got married four years ago, she has been living on monthly contracts.

“Because it costs a fortune to buy a home these days, most young couples, including us, think it is not the right time to do so,” Kim said. “We plan to wait until housing prices go down and we build up enough savings.”

Kim is among an estimated 7,500 households who said in the latest survey by the ministry that they don’t want to purchase a house now.

About 73 percent of 33,000 respondents said in the biannual survey they do want to own a house. That is down 10 percentage points from two years ago.

The report said the price-to-income ratio (PIR) for an average house in the Seoul metropolitan area stood at 6.7 last year, slightly down from 6.9 in 2010. But the figure is still high compared to 5.7 in 2006.

This indicates that it takes 6.7 years of income on average to pay for a Seoul metropolitan area property. The ratio for other areas was 5.1.

Meanwhile, the number of households living on monthly rent is on the rise, accounting for 21.6 percent of the total respondents, up from 21.4 percent in 2010, the report said.

The ratio of monthly rent to monthly income stood at 23.3, higher than 20.9 two years ago.

This means that average Koreans whose monthly income is 2 million won spend about 460,000 won on housing every month.

On a scale of one to five, respondents gave a 3.5 rating to their housing satisfaction.

The Land Ministry conducted the survey to provide data for the government’s housing policy.

“For those who are potentially capable of buying a house, the government is planning to increase financial support to do so, while trying to lower housing costs for low-income households,” the ministry said.