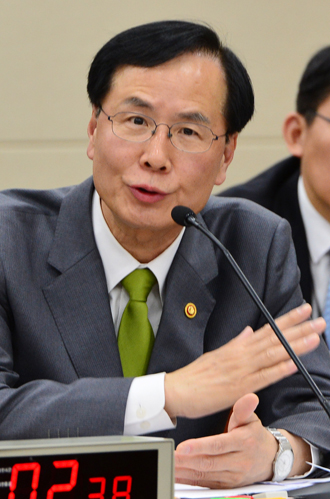 Noh Dae-lae, chairman of the Fair Trade Commission, has expressed his firm resolve to support the government’s “economic democratization” initiative.

“Legislation related to economic democratization aims to root out unfair trade practices in the market, but not suffocate conglomerates,” Noh said at his first press conference in Sejong yesterday. “I hope that the bills get passed by lawmakers in June.”

It was the first official statement on economic democratization by the new chief of the country’s antitrust agency, who took office in late April.

Noh said he hopes to see the bills that ban new cross-investments, internal transactions and owners of conglomerates from reaping personal rewards passed at the National Assembly next month.

The 58-year-old veteran economic bureaucrat said growing pressures to cut production costs are the main cause of unfair practices.

“In the midst of a global slowdown, local companies are trying to cut costs as they are threatened by Chinese rivals,” he said. “This leads to unfair contracts with their subcontractors.”

The chairman stated the main purpose of the FTC’s economic democratization drive is to block unfair practices by companies and support legitimate investment activities.

As for the recent phenomenon that the weak stand against the strong through social networking sites (SNS), Noh warned that owners of conglomerates need to be aware of it.

“Weak parties that used to be unable to speak publicly are now raising voices on SNS sites, and strong parties are increasingly aware of it and trying to stop treating them unfairly,” he said.

Some companies voluntarily promise to refrain from making internal transactions among subsidiaries, he added.

“Chiefs of conglomerates would have to take this matter seriously, because when they take irresponsible acts, public anger can easily be created online and expand into the offline world, triggering serious social conflicts,” he said.

However, Noh emphasized the role of the FTC is important here, since it will handle such controversial issues with law.

“The FTC will help the market become fair through rules and regulations,” he said.