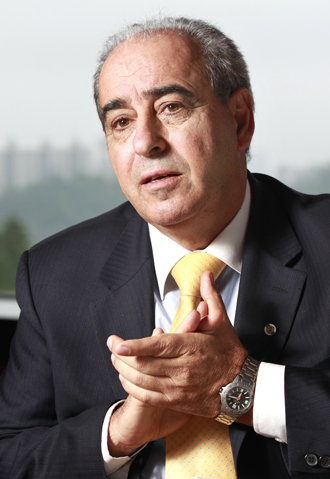 Korea resumed importing Uruguayan beef earlier this year for the first time since shipments were banned after a foot-and-mouth disease outbreak in 2001.

The Korea JoongAng Daily sat down with him prior to the event to discuss the negotiation process between the two countries and how Uruguayan beef can distinguish itself.

Q. How can beef from Uruguay appeal to Korean consumers who have many other options?

A. We haven’t used hormones for a long time. The use of hormones in the feed of cattle is strictly prohibited. All ranchers and rural producers have applied careful humanitarian practices in the production of cattle, feeding them on grass in a sterilized environment. So, the grass-fed cattle are free of illnesses and antibiotics. Our meat also has a rich taste and is less oily than U.S. beef. We want to position Uruguayan meat as a quality product rather than just a commodity.

How can Uruguay regain trust from the Korean government after the outbreak of foot-and-mouth disease?

Back in the early 2000s, most countries stopped buying beef from Uruguay. So it posed a great challenge. But we tried to turn the risk into an opportunity to raise safety standards. Uruguay slaughtered and buried the affected cattle and vaccinated all other cloven-hoofed animals. Since then, we’ve adopted a very strict safety standard.

The World Organization for Animal Health finally declared Uruguay as safe from mad cow disease. Acknowledging the efforts and improving quality of Uruguayan beef, countries that once banned our imports reopened their markets. Those include the United States, Canada, Mexico, the European Union and many others. We now export meat to more than 100 countries with China, the European Union, North America and Russia as the main markets.

Korea took a longer time to resume imports. Why?

I think Korea has higher standards than other countries when it comes to importing beef. And I heard Korean people are sensitive to the issue of beef imports. But this is why we consider Korea an important market, because being recognized by Korea means that we produce quality products. In a sign of how confident we are about the quality of our beef, we allow Korean importers to visit Uruguay and conduct on-site inspections of our farms. This is part of a series of steps aimed at achieving the trust of the Korean beef market and consumers.

For now, Uruguay is allowed to export only boneless beef. Does the country plan to ask for permission for more products to be sold?

We’ve just resumed exports, so our focus is on quality not quantity. The first container carrying Uruguayan meat is coming to Korea this week, which is really significant for both countries. I think retailers and people from the beef industry are in the process of making a contract.

But we hope in the future the Korean government will allow other beef products to be sold in Korea. We’ll keep working on the issue, going forward.