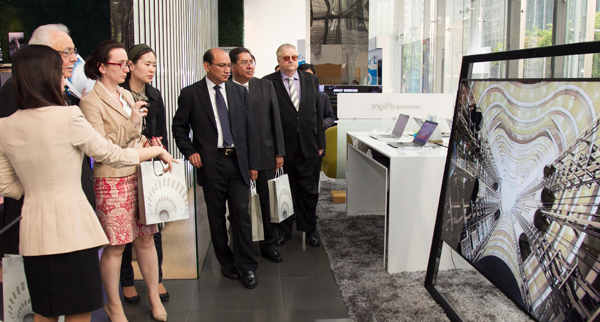 Ministers from Dominica, Honduras, Nicaragua, Guatemala and El Salvador examine the display at Samsung Electronics on Tuesday in Gangnam District, southern Seoul, as a part of a six-day visit to Korea hosted by the Ministry of Foreign Affairs and Korea Foundation to share Korea’s vision on information and communications technology and how it could be applied to economics. Earlier that day, they visited the Ministry of Science, ICT and Future Planning and discussed with senior officials how to apply ICT in the economy, government and international cooperation. Provided by Korea Foundation

Five ministerial-level officials in policy-making and industries from Central and South America exchanged ideas about information and communications technology and how it could be applied to economics with Korean officials on Tuesday as part of a six-day program.

The exchange of ideas included among many other topics a discussion on the meaning behind the ministry names also. On her Tuesday visit to Korea’s Ministry of Science, ICT and Future Planning, Ekaterina Arbolievna, Guatemala’s secretary for planning and programming of the presidency, was curious to know what ‘future planning’ in the ministry’s name indicated.

“For a country that doesn’t have resources, the only way to survive is to first, work diligently and develop industry, and second, develop the creativity of the mind,” Yoon Jong-lok, second vice minister of Korea’s newly minted Ministry of Science, ICT and Future Planning, a part of President Park Geun-hye’s overhaul of the preexisting ministries after the inauguration in February.

“Korea has always surpassed working diligently to develop industry and trade, and so, we had to change the paradigm and develop creativity to ‘plan for the future,’?” Yoon said.

Korea imports most of its energy and 80 percent of its food supply, said Yoon, and another 30 percent of government budget has to be spent on national defense.

“If we compare ourselves to a race, it is like we are starting 30 meters [98 feet] behind,” he said. In comparison, countries with a lot of natural resources may start 20 meters ahead.

Yoon went on to state that “education is the basis of imagination.”

To this, Antonio Isa, 73, Dominica’s minister without portfolio for consultation in policy development, the oldest delegate of the group from Latin America, asked, “What percent of the national GDP is spent on R&D?”

Yoon replied that 4.2 percent of the GDP is spent on research and development, but hopefully that amount will be increased to 5 percent within two years.

The five ministers from five Central and South American countries were invited by the Ministry of Foreign Affairs and the Korea Foundation on a six-day trip to Korea as a part of the “Vision Sharing Program for National Development.”

These senior officials from Dominica, Honduras, Nicaragua, Guatemala and El Salvador met with their Korean counterparts - from the Ministry of Foreign Affairs, Ministry of Security and Public Administration and Ministry of Science, ICT and Future Planning - and businessmen and participated in sessions on policy-making, small and medium businesses and digitalization of government. The program is in its fourth run since 2011.

They were able to visit Samsung Electronics in southern Seoul, straight after the visit to the Science Ministry, to see the applicability of information and technology and also headed to the Busan Port Authority, Hyundai Heavy Industries and Hyundai Motor in Busan on the following days.

Yoon described ICT as a facet of creativity and its integral importance in the daily lives of Koreans. “ICT is the vitamin of the people, it is not a necessity but if consumed, you gain vitality” and that it “is the tool that helps realize a creative economy.”

“Biohealth is the next big market,” said Yoon, describing the concept of having a “hospital in my hand” through technology, which would enable people to deal with chronic diseases and treatment at home. He also added that ICT can be applied to agriculture and produce.

Guatemala’s Arbolievna, 35, was the only female minister in the Latin America delegation that day. She also admitted that she is currently the youngest minister in her government. This was her first visit to Korea, and she said, “We do not have anything equivalent to an ICT and future planning ministry back home.”

Unlike Arbolievna, Paul Oquist, 65, Nicaraguan minister and private secretary for national policies of president, has visited Korea four times since 2000, and stated, “The history of Korea makes it more amenable to developing countries having been there, done that.” He has also visited the predecessor of the Science, ICT and Future Planning Ministry, the Ministry of Education, Science and Technology on his last visit.

Also in the Latin America delegation was Hondura’s secretary of state for industry and commerce, Jose Lavaire, and El Salvador’s Vice Minister of the Ministry of Public Works Hugo Alfredo Barrientos.

They expressed hope that Korea will continue to support the IT support center in Nicaragua by next year as initially planned. Oquist added, “ICT really is applicable to everything and is a great catalyst for every field” and “supports research and development, especially in the agricultural field.”

The Science Ministry plans on expanding the number of its overseas IT support centers from the current three to 10 by 2017.

Kim Jong-ho, director of the ministry’s ICT and broadcasting cooperation division, who also led a session with the ministers, said, “We invite around 300 officials a year.” Kim is also involved in many cooperative projects with various nations. “Korea provides refurbished analogue broadcasting equipment to countries that still use broadcast analog TV, such as Mongolia.”

Korea switched over from analog to digital broadcasting last year.

By 2017, the country wants to expand its Wi-Fi zones in public places fivefold, get rid of subscription fees for mobile phones by 2015 and increase the number of state-sponsored research institutes by five times to 5,000 by 2017.