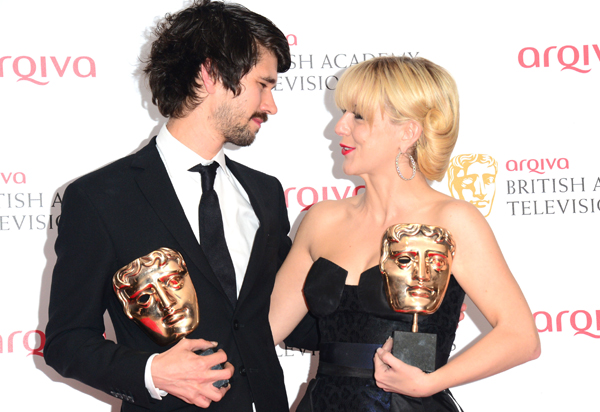 LONDON - Ben Whishaw was named best actor at Britain’s top TV awards on Sunday, cementing his status as one of the U.K.’s new leading men after starring in the James Bond movie “Skyfall,” while a satire lampooning London Olympic organizers won two awards.

Whishaw, 32, who is currently performing with Judi Dench in London’s West End theater district, won the award for playing Richard II in a TV film based on William Shakespeare’s play that was commissioned by Britain’s public broadcaster, the BBC.

“I’m really, really surprised. I was just hoping it would be one of the others just so I wouldn’t have to come up here and say anything,” Whishaw, the gadget guy Q in “Skyfall”, told a star-studded ceremony at London’s Royal Festival Hall.

The award for best actress at the British Academy Television Awards went to Sheridan Smith for playing the wife of the great train robber Ronnie Biggs in ITV’s “Mrs Biggs.” She beat the bookmaker’s favorite Sienna Miller, nominated for playing the American actress Tippi Hedren with whom Alfred Hitchcock was said to be obsessed, in the drama “The Girl” co-produced by the BBC and Time Warner’s HBO. The biggest winner of the night was the BBC comedy program “Twenty Twelve” about organizers of the 2012 Olympics, which won best situation comedy and nabbed the award for best female in a comedy program for actress Olivia Colman. She also won best supporting actress for “Accused.” Another Olympic show, “The London 2012 Paralympic Games” on Channel 4, won the prize for best sport and live event. The prize for best single drama went to “Murder” by Danish director Birger Larsen who also made the hit Nordic TV thriller “The Killing,” while the best drama went to “Last Tango in Halifax” about teenage sweethearts reunited 60 years on.

HBO show “Girls,” a comedy-drama about a group of 20-somethings in New York, won the international award, beating the Danish crime drama “The Bridge”, the post 9/11 psychological drama “Homeland” and fantasy epic “Game of Thrones.” But “Game of Thrones” was the public’s favorite, winning the Radio Times Audience Award voted for by the public. Reuters