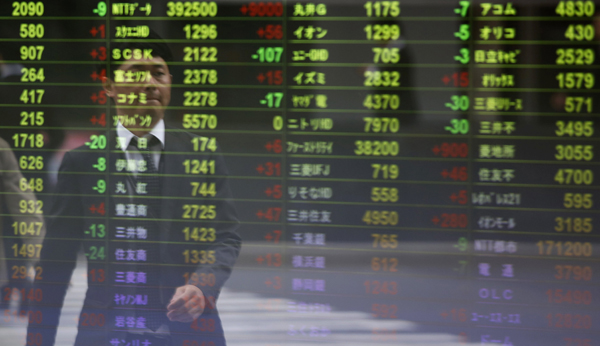 A passerby is reflected in a stock quotation board at a brokerage in Tokyo yesterday. Japan’s Nikkei share average surged to a fresh 5-1/2-year high as the weakening yen further bolstered exporters on hopes that they will raise their forecasts for the current year. [REUTERS/NEWSIS]

Despite the Korean central bank following the lead of other countries and reducing its key rate to stimulate the economy, the continuing Japanese yen depreciation overshadows its potential impact.

This concern has only been fueled further by the G-7 meeting last week in which member countries agreed to tolerate, while closely monitoring, the yen’s fall.

However, some market experts say that although the weakening yen will be a drag on economic growth, the second quarter might not be all that bad due to cooperation between the government and central bank, as well as diminished geopolitical risk.

The Japanese currency yesterday at one point was trading at 102 against the dollar, its weakest level since 2008. Since the end of last year, the yen has depreciated more than 17 percent. The Nikkei stock market yesterday added 1.2 percent or 174.67 points to close at 14,782.21.

The Korean won also weakened yesterday against the dollar, falling 5.6 won from Friday to close at 1,111.7. The yen has recently weakened as well against the greenback, which market experts attribute to foreign investors borrowing loans in Japan and reinvesting in Korea.

In a March report, Samsung Economic Research Institute estimated economic growth shrinks 1.5 percentage points when the yen is traded at 100 against the dollar and the won 1,000 to the dollar. Under such conditions, export growth drops 2 percentage points and the current account surplus by $12.5 billion.

If the yen further weakens to 118 against the dollar, while the Korean won appreciates to 930 won as was the case in 2007, the impact of the depreciated Japanese yen would be devastating for the Korean economy with growth falling by 3.8 percentage points. Even with the more optimistic outlook by the central bank of 2.6 percent year-on-year expansion, the economy would post shrink by 1.2 percent.

But some experts say that the impact will likely be cushioned by the BOK and government cooperation, and an improving global economy.

Additionally, heightened tensions with North Korea that led to an unprecedented closing of the Kaesong Industrial Complex affected the economy. The situation has mellowed after missiles that were deployed in eastern North Korea were removed.

“An internal safety net has been established,” said Kim Ju-hyung, chief strategist at Tong Yang Securities. “First, the government and central bank have changed their stance in accordance with the global movement toward economic stimulation,” Kim added.

Last week, the National Assembly passed a 17.3 trillion won supplemental budget, then the central bank lowered its key rate from 2.75 percent to 2.5 percent. It was the first change since October.

The Bank of Korea’s move is expected to help maximize the impact of the government’s stimulus package.

The Ministry of Strategy and Finance projected this year’s growth at 2.6 percent and the BOK estimated 2.3 percent.

Finally, Korean companies should start to benefit in the second quarter from improving economies in the United States and China.

“Minus growth is likely to turn to a positive growth,” said Kim at Tong Yang Securities.

“Industrial parts, especially, are expected to improve as economic indicators in China stabilize.”

“I believe concerns over the weakening yen are overshot,” said Ma Joo-ok, a Kiwoom Securities economist. He predicted the yen will likely not exceed the 100?per-dollar range.

“The weakening of the yen is largely due to appreciation of the U.S. greenback as concerns of an economic slowdown ease thanks to an improved unemployment rate,” Ma said. The U.S. unemployment rate shrank from 7.6 percent in March to 7.5 percent last month, the lowest since December 2008.

“Although weakening competitiveness of Korean exports in the global market is inevitable, it will not be as damaging as much as the market expects,” said Ma. “The government will have no choice but to further strengthen the domestic economy.”