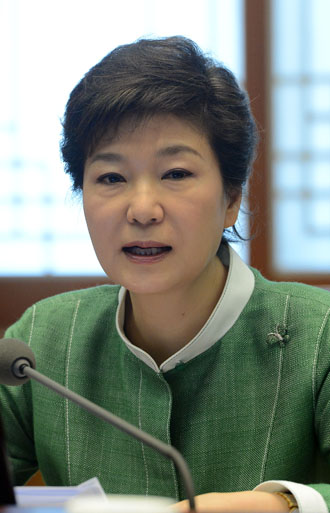 President Park Geun-hye yesterday apologized for the sexual assault scandal involving her former spokesman that tarnished her maiden trip abroad to the United States and vowed to tighten discipline in her office.

The Blue House subsequently launched an internal review to comb through the activities of all presidential aides who accompanied Park on the trip last week.

“Toward the end of my visit to the United States, an unacceptable incident was committed by a public servant,” Park said yesterday morning at a meeting with her senior secretaries. “I feel extremely regretful to disappoint the people.”

Park fired her spokesman, Yoon Chang-jung, in the middle of her trip to the United States last week, following an allegation that he sexually abused a young Korean-American female intern from the Korean Embassy in Washington. Yoon fled back to Korea while the Washington police investigation of the misdemeanor sexual abuse charge remains open.

Many questions have been asked about how the scandal was handled by the Blue House, whether it tried to cover it up, and who told him to return to Korea.

Yoon is accused of grabbing the buttocks of the intern at a bar in a Washington hotel on the night of May 7 and, the following morning, summoning her to his room in another hotel and meeting her at the door naked. Yoon said at a press conference Saturday that he patted the young woman’s waist, and called the incident a “cultural misunderstanding.”

Park yesterday also issued a direct apology to the victim and her parents as well as the Korean community in the United States. Calling the incident a grave wrong to the people and the country, Park promised to lay bare the truth of the incident and how it was handled.

Park also pledged to tighten discipline of officials working for the Blue House. “If a similar incident ever happens again, all the senior secretaries must take responsibility,” she warned.

Lee Nam-ki, Park’s senior secretary for public relations and Yoon’s immediate supervisor, already offered his resignation. Lee was absent from the meeting yesterday morning. But Kim Haing, the Blue House spokeswoman, said the president has yet to accept his resignation.

Yoon said Saturday he was ordered to return to Korea by Lee.

Lee denied he ordered Yoon’s return, but a government official told the JoongAng Ilbo yesterday that Lee did make the decision.

“Lee was worried that the outcome of the Korea-U.S. summit would be tainted if the Yoon scandal broke out in the United States,” the source said. “So Lee decided that it was important to separate Yoon from the delegation.”

Another source in Washington also said Lee ordered Yoon home to stop the scandal from growing after he was briefed about the alleged sexual assault.

Kwak Sang-do, senior civil affairs secretary to the president, made clear Sunday that no further investigation will take place to find out who arranged Yoon’s return because it was not against Korean or American law. He said there was no sense in nitpicking the details. Following Park’s meeting with her staff yesterday morning, Huh Tae-yeol, presidential chief of staff, ordered a thorough investigation into all other staff who accompanied Park to the U.S.

“The office of the senior civil affairs secretary should look into the entire entourage and their activities,” Huh was quoted as saying by Kim. “And we need to create a manual to guide the president’s overseas trips in the future.”

Promising to show zero tolerance for inappropriate conduct, Huh said the Blue House will reinforce its education on sexual harassment in particular. He told the staff to look back on their attitudes at work and privately.

Park’s remarks yesterday were her first direct public apology since she took office in February. After Yoon was fired, his supervisor Lee and Park’s chief of staff, Huh, issued apologies one after another but they failed to quell suspicions that the Blue House tried to cover up the scandal, particularly after Yoon’s press conference Saturday.

In April, Park expressed her regret over a series of botched appointments to her cabinet during a Blue House dinner with opposition leaders, but it was not a public event.

While the ruling party defended the president by calling the apology “proper,” the opposition parties were not satisfied.