Yoon’s ‘Hangover’ of a trip

Yoon’s ‘Hangover’ of a trip 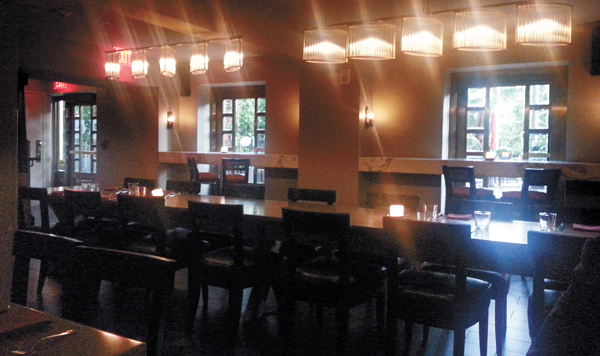 The bar of W Hotel in Washington where the alleged misdemeanor sexual abuse by the presidential spokesman took place. By Lee Ji-eun

Despite public denials of sexual assault in Washington last week, accounts from eye witnesses in the U.S. capital and Blue House sources showed that Yoon Chang-jung, former spokesman for the president, aggressively came on twice to a young intern and tried to hush up the incident.

Yoon, who accompanied President Park Geun-hye on her maiden trip abroad to the U.S. last week, cut his trip short and fled Washington Wednesday afternoon to return to Korea. It was later revealed that the Washington police opened an investigation into alleged misdemeanor sexual abuse. Park fired him last Thursday.

Yoon held a press conference in Seoul Saturday, giving a 30-minute version of what happened in Washington between him and an intern assigned by the Korean Embassy in Washington to help him.

Yoon said he scolded his “guide,” as he called the intern, for her poor performance and later took her to a bar to drink because he felt sorry for her. He said his chauffeur joined them for the quick drink on Tuesday night at the W Hotel, which lasted about 30 minutes.

While the Washington police report registers a complaint that Yoon “grabbed her buttocks without her permission,” Yoon argued that he simply patted the intern’s waist to cheer her up, claiming it was a “cultural misunderstanding.”

Despite Yoon’s claim that he drank from 9:30 p.m. to 10 p.m. with the victim and the driver, witnesses in Washington said the drinking session involved two bottles of wine and took another two hours. The driver drank cola.

The group returned around midnight to the Fairfax Hotel, where Yoon was staying along with members of the press and a group of interns, including the intern from the Korean Embassy. Yoon drank at the temporary administrative office of the Blue House press center until 2 a.m. Wednesday, the source said.

From 2 a.m. to 4 a.m., Yoon’s whereabouts are unclear, but the source said Yoon appeared to have drunk more during the period. Around 4 a.m., he was spotted by several journalists around the hotel.

Yoon claimed he retired to his room around 11 p.m. and slept until the morning.

Yoon reportedly made his second pass at the intern around 6 a.m. Wednesday. He reportedly summoned the intern to his room and opened the door stark naked. The intern returned to her room crying, according to her roommate and a co-worker.

At Saturday’s press conference, Yoon also gave a different story about what happened Wednesday morning. He said he heard a knock on the door, opened it and saw the intern standing outside. He said he told her to leave right away and she never entered the room. He claimed he was wearing underwear at the time.

Around 6:50 a.m., Yoon left the hotel to accompany Park to a breakfast meeting with Korean tycoons.

Around 7 a.m., the head of the Korea Culture Center (the technical employer of the intern) informed a Blue House official about the incident.

Yoon returned to the breakfast event. The intern’s roommate called the Washington police and they visited the hotel. The co-worker recently tendered her resignation to the Korea Culture Center, the JoongAng Ilbo reported yesterday.

Blue House spokeswoman Kim Haing said yesterday that Korea’s Ministry of Foreign Affairs made a request to U.S. authority yesterday to proceed with its investigation into Yoon as quickly as possible, promising the Korean government’s full cooperation.

She urged Yoon to submit to the U.S. police probe.

“Nothing currently bars him from going to the United States to submit to the investigation,” Kim said. “It’s completely up to him.”

Kim also said if the victim decides to file a complaint to Korean law enforcement authorities, an investigation could also open in Korea.

According to a Korean government official in the U.S. capital, the Washington police are expected to question the victim this week. The source said the police only conducted a preliminary investigation after receiving the complaint.

As of now, the case is classified as misdemeanor sexual abuse. Because the case took place in Washington, it falls under federal jurisdiction.

“Under the federal law, a misdemeanor can be punished by up to 180 days of imprisonment or less than $1,000 fine,” a Korean lawyer in the United States said.

“If that is the case, it’s unlikely they’ll seek his extradition to the U.S.”

But the lawyer said if more charges are added, such as the alleged greeting of the intern at the hotel room door naked, the situation could change.