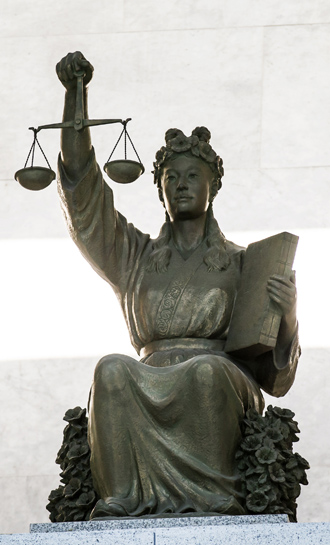 A 45-year-old man surnamed Park, who lives in Yongin, Gyeonggi, says he lost two family members both in the same year.

Kim’s father died in March last year. Three months later, Kim received a civil suit petition raised by his younger sister, who filed a lawsuit against her brothers claiming she has a legal right for some portion of her late father’s wealth.

Kim’s sister demanded 100 million won ($90,400), saying her father passed down his wealth to only his sons.

The Kim brothers pleaded the sister drop the charge to no avail. After a year-long legal battle, a court issued a compulsory mediation that the brothers provide the sister with 40 million won.

The brothers were not budged by the ruling and appealed the decision.

The legal dispute dissolved Kim’s family, with the brothers and the sister not talking once since the lawsuit started.

Women are increasingly filing inheritance lawsuits against their siblings, seeking a fair part of their inheritance.

The inheritance law in Korea requires at least half of inheritance be evenly distributed among legal heirs.

According to the Supreme Court, the sibling inheritance lawsuits increased almost 10 times over a decade, reaching 588 such cases last year from 69 in 2002.

Experts attribute an improvement in women’s rights in Korea to the rise in the number of such lawsuits. The official data back up the claim.

Of the 67 reserve inheritance court sentences handed down by courts in Seoul from January last year to March this year, 51.6 percent of plaintiffs were found to be daughters, while only 25.2 percent of them were sons.

“Because of the notion shared by the traditional generation that daughters are out of the family circle once they marry, parents usually leave a larger share of inheritance to their sons rather than daughters,” said Lim Chae-woong, a lawyer at law firm Bae, Kim & Lee.

“An increase in lawsuits is related to a sense of gender equality rights recognized by daughters these days,” Lim added.

The prolonged economic slump and disintegration of family values are also cited as reasons for inheritance lawsuits.

“In the past, people cared more about being inside a family circle and feared being excluded from it. But now, there is much less hesitancy to bring lawsuits against family members,” said a Seoul High Court judge, speaking on the condition of anonymity.

Assets that are handed down while a parent is still alive can also be brought before a judge.

A 67-year-old defendant surnamed Kwon was ordered by the Seoul Western District Court to pay his sister 540 million won for land, now worth about 6 billion won, he received from his father from 1973 to 1979.

The legal process for a fair share of inheritance can be tricky and could take well over three years for a verdict.

It took three and a half years for one lawsuit raised by a 59-year-old female plaintiff surnamed Gong against her four brothers in March 2009 to reach a verdict.

On average, it takes 136.7 days for a civil trial to reach a verdict.

With Gong’s legal battle, whether or not the increase in the value of the land that was passed on to the four brothers, which soared thanks to construction of a golf course nearby, should be considered as part of the overall inheritance was a focal point of the argument.

“An inheritance law suit may seem simple at first glance, but it is never an easy legal task,” said lawyer Lim.

Side effects of having a legal battle with siblings can be traumatic as many defendants and plaintiffs become estranged from each other.

“Through a fierce legal battle with lawyers being hired, it does not take long for family members to turn on each other,” said Choi Myung-ho, an attorney at Shin & Kim law firm.

Choi calls for prudent decisions by parents to avoid a legal battle that could deal a serious blow to family relations.

“Deceased parents are for the most part responsible for inheritance disputes among grown children. To prevent such a pitiable legal battle, one should come up with a fair and elaborate inheritance plan for family members.”