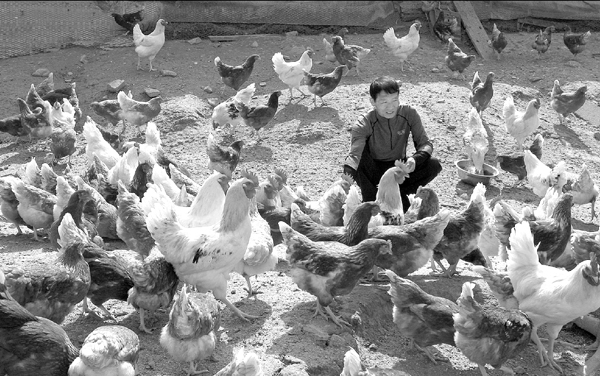 Min Seok-ki, a poultry farmer in Hwasun County, South Jeolla, tends his free-roaming hens on his farm. By Oh Jong-chan

Farmers in South Jeolla are showing signs of sensitivity toward the quality of life of their animals as well as what they’re putting on their crops.

Since the introduction of the so-called “animal welfare program,” implemented in 2006, some livestock are leading better lives by not being confined to small cages.

Animal-friendly farming has extended to organic crop farming in the province, which has yielded more than a five-fold increase in the number of farming operations that make more than 100 million won ($89,600) a year.

At a poultry farm in Hwasun County, South Jeolla, hens roam freely, an unconventional method of raising chickens as the majority of domestic chickens are raised in cramped cages.

Farm owner Min Seok-ki does not inject his animals with antibiotics but instead uses all-natural feed. 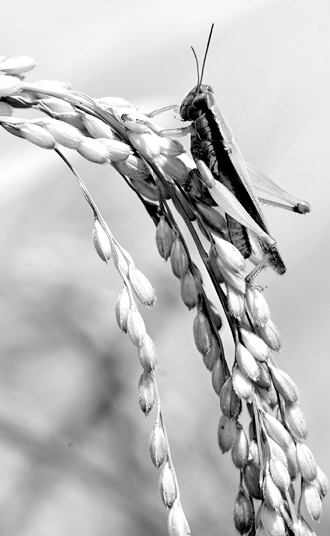 South Jeolla employs locusts in their rice fields as part of its organic farming program. Locusts consume weeds before they spread, working to replace weed-killing herbicide. Provided by the South Jeolla Provincial Government

As word spread that these eggs are laid with the aid of antibiotics and the hens are free-range, each egg sells for between 280 to 500 won, far more expensive than traditionally produced eggs.

A hog farm in Haenam County, South Jeolla, is another good example. Hogs there are also raised free from the traditional crates used in large operations.

In order to induce farmers to expand their farming areas and provide enough space for their livestock to roam, the South Jeolla Provincial Government is providing low-interest loans.

“When the highly contagious foot-and-mouth disease swept the country in 2010, South Jeolla was spared from the disaster, largely thanks to our animal-friendly way of farming here,” said Lim Young-ju, director of the agriculture and forestry office at the South Jeolla provincial government.

Official data backs up the claim. The percentage of cows in South Jeolla infected with highly contagious brucellosis was 0.08 percent last year, much lower than the average of 0.14 percent nationwide.

As far as crops go, the number of mud snails in South Jeolla rice paddies has grown much higher than in other provinces.

With the provincial office providing subsidies to farmers to purchase the snails, crop farmers have stopped spraying weed-killing herbicide and instead use mud snails, which eat weeds before they spread.

The favorable consumer sentiment to rice products free from chemical weed-killer led to an increase in product price.

The provincial office reported 2.4 billion won is now saved per year from not using the herbicide products. 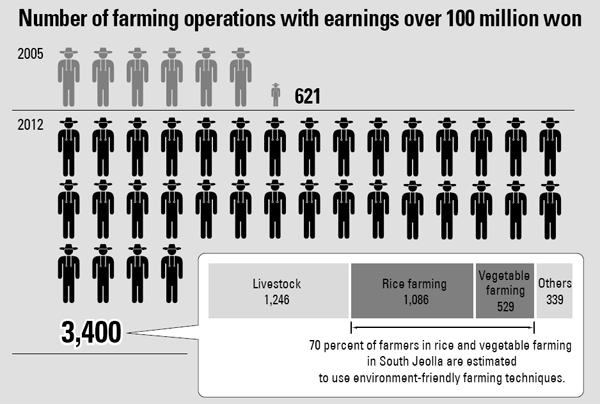 Many farmers in South Jeolla are thriving on the organic livestock and crop farming driven by the provincial government over the past 10 years.

As the region’s high-quality and safer products have become more well-known, 3,515 out of 7,323 elementary, middle and high schools in Seoul use rice harvested from South Jeolla for their lunches.

The provincial office began taking on the organic farming project led by Governor Park Joon-yung in 2004.

“Provincial officials and I mulled over ways to bolster South Jeolla’s competitiveness and came up with this idea of organic farming,” the governor told the JoongAng Ilbo.

“I was certain people would be much interested in ‘safe and healthy food’ produced by organic farming as the standard of living improves.”

With the initiative in full swing, all provincial officers were mobilized to spearhead the new way of farming.

The provincial government set up an education center to teach farmers how to grow and harvest crops free of herbicide and ways to raise livestock in a humane way.

Over 100,000 farmers have been instructed at the center. South Jeolla alone accounts for about 60 percent of environment-friendly farmland in the country now.

With the province’s renowned agricultural products, revenue for farmers in South Jeolla has spiked.

The number of farm operations in the province earning more than 100 million won a year has increased more than fivefold in seven years, from 621 such operations in 2005 to 3,400 last year.

Meanwhile, the yearly income level for farmers nationwide on average was 30 million won in 2011, a 6.1 percent decrease from a year earlier.