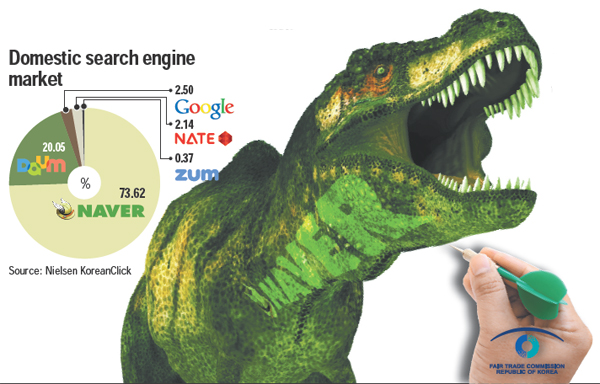 The government’s first IT target in its campaign for “economic democratization” is Naver, the nation’s largest Web portal site, and its aggressive expansion into various services.

The Fair Trade Commission is currently conducting an investigation into NHN, the operating company of Naver. The government’s antitrust agency raided the company’s headquarters in Bundang, Gyeonggi, on Monday.

“The authority has been closely watching the company for the past three months, and we found some suspicious acts,” said a high-ranking official at the FTC. “The latest inspection is aligned with the government’s economic democratization drive, aimed at creating a sound online market that protects small players.”

Both main candidates in last December’s presidential election promised “economic democraticization” - a goal enshrined in the Korean Constitution - if they won. President Park Geun-hye’s government is going after big companies that run roughshod over suppliers, customers or much smaller competitors.

According to the official, if Naver is found to be abusing its dominant status in its industry or the markets it competes in, it will face penalties.

NHN’s official stance is that it will cooperate with the authority in its investigation.

It is the second time the FTC has put NHN in its crosshairs. The company was slapped with a 227 million won ($204,981) fine in 2008 for intentionally hindering operations of a video content provider by abusing its dominant status in the Internet search engine market.

NHN avoided the fine after an appeals court ruled that the FTC couldn’t prove unfair acts by the company.

According to market researcher Nielsen KoreanClick, Naver is the largest search engine site with around 74 percent market share in the country. Its dominance on the Internet in searches is expanding into the mobile world as the portal’s application for smartphones accounts for about 67 percent of the mobile search market.

The company has grown to 2.4 trillion won in sales and 702 billion won in operating profit last year. Its sales-to-operating profit ratio around 30 percent is double that of Korea’s No. 1 conglomerate, Samsung Electronics. Lawmakers from both the ruling and opposition parties have been arguing that Korea’s cyberworld needs a fairer playing field to protect small players and start-ups against online behemoths like Naver.

Some argue that Naver should be designated as a dominant player in its market and regulated by the government like SK Telecom, the country’s No. 1 mobile carrier, which controls more than 50 percent of the local telecommunications market. If so, the portal site would have to ask for approval from the government whenever it launched new services.

Jun Byung-hun, a lawmaker from the opposition Democratic Party, reportedly plans this month to submit a bill that regulates large online players.

The lawmakers claimed that the real estate market is the biggest victim of Naver’s relentless expansion.

According to Korea Association of Realtors, if a real estate agency wants to subscribe to the Naver real estate service as a premium member, it has to pay up to 10 million won for a six-month membership.

“Realtors say the fees are killing their businesses,” said Chae Hyun-gil, a researcher at the association.

Premium members’ advertisements are shown at the top of lists.

The portal titan has also eaten into such online businesses as music, books, cartoons and shopping.